Hualapai healing for Britney too

Britney Spears to meet with Native American healerComment:  If Lindsay, Paris, or the Olsen twins seek out this shaman, it's officially a trend. 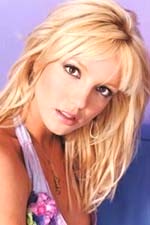