The myth of Taino extinction

A response to the claim of Taíno extinction

By Roberto “Mukaro” BorreroComment:  The short version of this seems to be: "Our blood quantum doesn't matter because we're Taino culturally." Which is the position taken by most Indians in most tribes.

Note that Borrero considers "affirming and promoting their ancestral heritage or speaking out for the recognition of their collective rights" part of the Taino identity. It's not enough to say you have one or two Taino ancestors in the distant past, even though you're clueless about what it means to be Taino. You have to be Taino in practice as well as in theory. 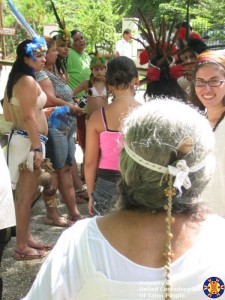 Well, for one, when people portray the Caribbean in this time, they no longer portray Caribbean Indians as...Indians. I don't just mean "pick non-Indian to play Indian"; they've completely written the Taínos out of their own history. You'd be surprised how many people I've met who think modern Jamaicans' ancestors always lived in Jamaica. Oh, that's so cute.