No filmmaking flood after Atanarjuat

After noting the movies I posted about in Sharing Our Stories Boxed Set, an article discusses the state of Inuit filmmaking:

Out in the cold: the struggle of Inuit film

By Guy DixonComment:  One problem with this analysis: Atanarjuat (The Fast Runner) wasn't that great a movie. Sure, it was a conceptual and technical breakthrough: a full-length Inuit drama! But as entertainment for general audiences, it was less than compelling. As I recall, it took almost an hour to figure out who the characters were, and for the main action to unfold.

We'll see how On the Ice and Everybody Loves Whales Big Miracle do with general audiences. But I suggest making movies of stories such as The Terror or The Cage. If audiences don't go for these thrillers, then you can say there's no market for Inuit-themed dramas.

For more on the subject, see How Atanarjuat Was Filmed. 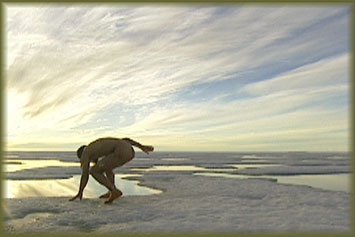 "Wasn't that great." Are you kidding? This was epic storytelling, amazing acting, cinematography. It was unique - an oral story adapted to film! And you thought what, it was too pedestrian / not poppy enough / maybe not enough sex and drugs? Come on, man!

I agree with Anonymous - I really enjoy the film. I thought it was great.

No, I wasn't kidding.

Though it's received oodles of accolades and reams of glowing reviews, Atanarjuat: The Fast Runner plays more like an unfinished documentary than a feature-length film (though, in all fairness, it's entirely possible that's exactly the sort of vibe the filmmakers were going for).