The problem with Moonstar 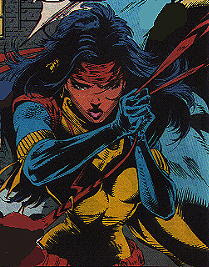 I agre with you , marvel have not enough imagination , moonstar is one of my favorite and with the biggest potential .
If you want to make her more visible : bring back his horse with valkyrie/asgardan powers (after all the asgardians survivors are on eath and they need a erth-born walkyrie) turn his color skin in blue or red permanently or when she use his psy powers like illusions (materilized or not) psychic arrows or any forms she needs ...

and , more , you can change his sexual identity to make her falling in love with karma who can find in Dani the perfect love partner because she is , perhaps, the only one to know the wounds of her past

Don't keep saying "his" when Dani Moonstar is a "her."

Changing Moonstar's powers, making them too complex, is what hurt her character in the first place. I'd choose one or two simple powers and stick with them.

Making Moonstar a lesbian might work since I don't think she's ever had a (heterosexual) romance. But it might make her seem too much like Gen13's Rainmaker.