AFN's Fontaine says he hopes statement will 'close the book' on apologies issueAnd:Comment:  This is what's known in the media as a non-apology apology. The Pope feels sorrow that someone somewhere did something bad. But don't blame him or his church for anything. It was a few bad apples--kind of like Abu Ghraib--not an institutional failure. Some priests stepped over the line, but the church's mission--to convert non-believers to Christianity--remains a sound one.

Yeah, right. If you believe that, you'll believe the Vatican is thinking of selling its art to help the poor, huddled masses around the world. You know, the people Jesus said we should help?

But if Fontaine is satisfied, I'm happy for him. Since he seems to be leading the quest for apologies, he should know if the "book" is closed. Now maybe he can concentrate on something else--like getting tangible aid for his people instead of more "sorrowful" words.

Anyway, let's hope this non-apology apology provides the closure and healing the residential school survivors need. I trust their quality of life will increase and their pain and anguish will decrease. After all, the Pope's is God's man on Earth, so his words should be able to heal someone.

For more on the subject, see Canadian Apology = Divide and Conquer and Our Turn to Apologize? 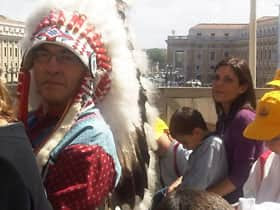