Russell:  Churchill’s third juryMore on the book in question:

Pacifism as PathologyComment:  In the wake of 9/11, I posted Diplomacy Works, Violence Doesn't--a response to those who wanted to launch a "crusade" against Muslims. I'm glad to see history has proved me right again. We haven't captured Osama bin Laden, Al Qaeda has regrouped, Afghanistan is still a failed state, Pakistan is still supporting terrorists, and we've wasted countless resources fighting a nonexistent threat in Iraq.

Anyway, I agree with Russell on this issue. I can't think of many cases where armed revolution has led to a democracy that improved the lives of the masses. No doubt I'd kick Churchill's butt if we debated the issue. 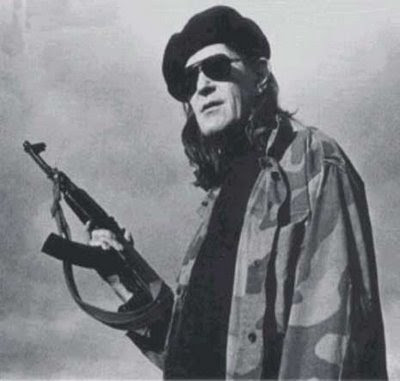 I can't see how anyone would count Saddam Hussein and his large army, and the other terrorist groups as "nonexistent". Other than that they are now as "nonexistent" as they have ever been due to the US and allies successfully fighting to eliminate them.

On to another point:

"I can't think of many cases where armed revolution has led to a democracy that improved the lives of the masses."

Ward is quoted as mentioning as pacifist movements "Gandhi in India, 1960s antiwar activists, even Martin Luther King's civil rights movement". I wonder if this is pretty much it? Because at the time of 1998, a huge and successful pacifist movement was already part of history. In terms of change and numbers of lives affected, it is comparable to the Gandhi effort, and much bigger than the other ones. I am referring to the "Revolutions of 1989", described as a "a surge of mostly peaceful revolutions" that turned the Iron Curtain into a few flakes of rust.

These peaceful internal grassroots efforts did more to end the Soviet empire than Reagan's military efforts.

People (including various Irish republicans I've argued with) forget that violence is a last resort (the Irish war for independence is a perfect example) just like at the NI troubles to see what 'armed struggle' achieves (like I posted before AIM has a history being pro-SF/IRA and pro-PLO). Personally I find the glorification of 'armed struggle' to be extremely offensive, as that pic of wardo clearly demonstrates militant idealogies are for losers.

The picture of Ward makes me think of those pictures of SLA members and other "homegrown" terrorist groups.

Somehow I missed this lil' gem:

So in other words you consider money spent to protect Iraqis from terrorism and improve Iraq to be a 'waste'; thank for showing how little a 'compassionate' lefty like yourself cares about the Iraq people. This plus your sexist language shows just how warped your world view is.

If what's going on in Iraq is truly as horrible as anti-warriors try to make it out to be (when they're glorifying terrorists of course) why do such people have to exaggerate the numbers?

The reason I find that stupid phrase 'armed struggle' offensive is that when I hear I don't think of mythical 'freedom fighters' that Wardo's twisted little tribe drools over I think of Marie Wilson a nurse who never lived to see her 21st birthday thanks to the IRA's enniskillen bombing. I think of little 8 year old Oran Doherty who was murdered in the RIRA's Omagh bomb who just wanted to have a fun day in Omagh and the rest of these people:

I think of Margaret O'Hare an innocent 34 year old woman murdered in this example of 'armed struggle':

People who advocate pacifism are not talking about being meek but simply using brains over idiotic adolescent 'freedom fighter' fantasies. It's very easy for scum like Ward to hoot 'n howl from the safety of their arm chairs about 'resistance' but the people who've actually experienced such things never see it the same way. It's always the people who've never been to war who are so quick to glorify it, to hell with Churchill, to hell with Means, AIM and anyone who dares to defend or support or take part in this kind of inhumanity.

Stephen: I see the actual death figures in Iraq get exaggerated an astounding 1,300%. Yes, one thousand three-hundred percent. There is nothing wrong with pointing out the factual numbers, just like a person is not a "Holocaust denier" for pointing out that Hitler killed 6 million Jews instead of some imaginary 1,300% inflated figure of 78 million Jews.

Exactly, also compare the actual numbers to how many Saddam slaughtered (I don't recall seeing any flower children protesting that), so lives have been saved. And not just in Iraq; Palestinian terrorism has gone because Saddam is no longer around to pay the families of suicide bombers $25,000 per homicide bombing, so quite a few Israeli lives have also been saved. Plus it's worth pointing out that Vladimir Putin revealed, Russian intelligence believed Saddam was planning terrorist attacks inside the US:

"I can confirm that after the events of September 11, 2001, and up to the military operation in Iraq, Russian special services and Russian intelligence several times received...information that official organs of Saddam's regime were preparing terrorist acts on the territory of the United States and beyond its borders, at U.S. military and civilian locations."

"so quite a few Israeli lives have also been saved."

And finally, Palestinians die because of the disruption in medical services due to the Palestinian military's habit of disguising troop transports as ambulances.

So, less terrorism is a lot better for Palestinians too.

Well put, sorry I forgot to mention that (I'm not exactly on an expert on that conflict). But you've highlighted a very common pattern; terrorist groups never improve anything for the 'their' people, the IRA made NI worse, AIM made pine ridge poverty worse etc...