Criticizing something doesn't mean I'm "uptight" about it. It means it's wrong and therefore deserves criticism.

I also criticize people when they say 2+2 equals something other than four. I'm not uptight about these mathematical mistakes either. I'm simply correcting them so people will know better next time.

You said the so-called satire exists to make people talk about stereotypes? Okay, I've talked about them. So what's the problem? I've pointed out that they're wrong in reality and in Family Guy, too.

Was there something else about these stereotypes I was supposed to talk about? If so, what was it? I'm not a mind reader, so spell it out.

I think I've seen every episode Family Guy, so I know it has attacked Indians more often than other minorities. You'd know this too if you'd watched the show as much as I have.

FYI, it's stereotyped Indians half a dozen times, which is a huge number for a series with 124 episodes (so far). Given that Indian make up only 1% of the US population, they should've been targets in only 1-2 episodes, not 6-7.

Your claim that the series insults everyone equally demonstrates that you haven't thought about it enough. In particular, you haven't tried to quantify the insults as I have. That's why I can say Family Guy has attacked Indians more than their fair share.

Incidentally, your Isaac Hayes analogy fails because I haven't accepted Family Guy's attacks on other minorities. I've criticized them too whenever they came up in conversation--which admittedly isn't often. Unlike Hayes, therefore, I'm consistent.

For more on the subject, see Family Guy Offends Everybody? and Equal Opportunity Offenders 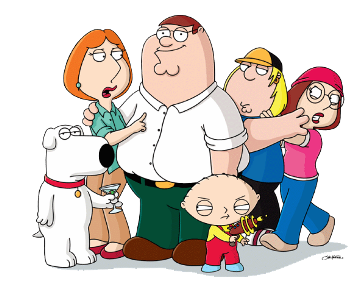 Not to mention, the "jokes" in 'Family Guy' are disjointed and stupid. Hell, it ain't even 'stupid humor' done right. It's like these other freewheelin' racist jokesters who cling to offensive humor under the pretense of "mocking racists/racism". You can't *make light* of something as devastating as racism if you are the one doing the oppressing (*cough* the creators of 'Family Guy' *cough*). There is no real work being done.
What satire? Yeah, I can really picture the types that watch that show sitting down to talk about racist stereotypes after viewing one of the MANY anti-Indian episodes. (Wow, Seth MacFarlane - obsessed with us, much?) Or better yet, one of these episodes inspires fans to examine the numerous privileges they have as either white or non-Indigenous people. Right...
To sum up 'Family Guy': the humor is racist, the jokes are contrived and the writing isn't original at all. So good on criticizing that show. I can't believe 'King of the Hill' was taken off the air for another garbage offering from the Seth MacFarlane enterprise. I'm sure people are looking forward to not only the racism, but all the unapologetic and blatant sexism and homophobia this one has to offer. MacFarlane is one sad little man.