Legend of Geronimo’s bones one of manyWhy do parachutists yell "Geronimo!" when jumping from an airplane?

Comment:  Cecil Adams notes that the first jumper yelled "Geronimo!" followed by an Indian war whoop. This tells you what's really behind the "motivational cry." People see Geronimo and other Indians as foolhardy, crazy, death-defying to the point of suicide. In other words, savage and uncivilized.

No one would think of yelling "Custer" or "Patton" to indicate someone willing to throw his life away, literally, to win a war. But we believe Geronimo and other Indians are just that wild and irrational. They don't care about human life the way we do, we tell ourselves. They're like screaming madmen, banshees, or beasts compared to us.

For more on the subject, see Review of Geronimo. 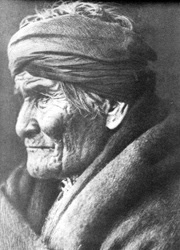