Speaking of Natives and nuclear bombs, here's another item on the subject:

Operation RedwingComment:  This is yet another example of using Native terms to denote toughness, violence, or savagery. For more on the subject, see Indians in the Military. 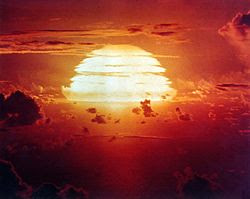