The White Privilege of Cows

Native Americans' ancestors were slaughtered, but they should be thankful anyway, the op-ed suggested.

The Daily Herald has published racist content three times in as many weeks. 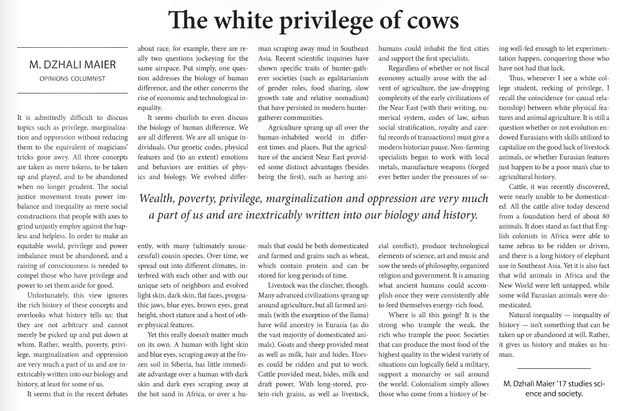 Maier spends almost half this column talking about racial differences. She then switches to cultural differences, a completely different topic.

As noted in the first paragraph above, she talks about the amazing things accomplished by Near Eastern civilizations. One, the civilizations of the Americas produced many of the same things: agriculture, writing and math, art, religion, philosophy, architecture, astronomy, medicine, etc. Two, these accomplishments had nothing to do with racial characteristics. Maier talks about biology, but the only biology in play here is access to better crops and livestock.

Near the end, Maier asks whether the link between race and culture is correlation or causation. In her final paragraphs, she implies it's causation. For instance, British colonists domesticated zebras, she claims, whereas African natives couldn't.

But as Jared Diamond pointed out in Guns, Germs, and Steel, this is mostly wrong:

The Story of... Zebra and the Puzzle of African AnimalsWestern Civ is best?

Maier is basically gushing about Western Civilization while pooh-poohing non-Western civilizations. There's no attempt at balance here--no mentions of European horrors such as the slave trade, the extermination of native populations, and the Holocaust. Her goal is to tout the superiority of white civilizations.

She tries to fudge this by referring to "Eurasians," but there are no specifics about the great cultures of China or India. With the notable exception of the Mongols, these civilizations did not try to colonize the world. Why not? Because being "well-fed" and "strong" like these Asian cultures doesn't necessarily lead to conquest.

What leads to conquest is a religious or philosophical belief that you're a chosen people who deserve to rule. That it's your God-given duty to bring the "light" of "civilization" to the dark (-skinned) corners of the globe. It's that kind of attitude that drove all the soul-crushing civilizations of Europe, including Rome, Britain, America, Germany, and the USSR.

For more on Western Civilization, see King Touts "Values Columbus Brought" and Alternatives to "Got Land?" Shirt.
Posted by Rob at 9:11 PM