Thursday WHO’S WHO:  Hawk (Son of Tomahawk)Note the stereotypical names of Tomahawk's relatives:Comment:  I wasn't into Westerns as a boy, but I picked up SON OF TOMAHAWK #132 and #136 a couple years ago. Based on what I read, the stories seemed to be sentimental tales of peace and brotherhood. They were something like episodes of Dr. Quinn, Medicine Woman. Some bad guys would insult or attack Tomahawk's family or another minority (e.g., slaves). Tomahawk and Hawk would ride to the rescue with guns blazing. The bad guys would get it in the end, perhaps with someone sacrificing himself, and the good guys would prevail. Message: Can't we all just get along?

Tomahawk was the patriarch of his big happy family. It included his Indian wife and in-laws and his part-Indian sons. The clichéd names pretty much told you everything you needed to know. Moon Fawn was an earth mother, the in-laws were old and wise, and Small Eagle was young but plucky. (One wonders if they would've changed his name to Medium Eagle and Large Eagle as he grew older.) The other Indians spoke normally but Small Eagle talked like Tonto: "My grandfather, the chief, promise Small Eagle pine tree!"

The Indians were generic Plains Indians. On the downside, they said generic things like, "We are thankful for the good earth--mother of us all!" They showed no sign of having a culture other than generic nature worship. They didn't even use any Indian words.

On the upside, there were no chiefs in warbonnets, sexy princesses, or half-naked warriors in evidence. The Indians sensibly used rifles, not bows and arrows. There were terribly bad Indians as well as wonderfully good Indians.

Read the lead story in SON OF TOMAHAWK #138 here:

I think it's supposed to be one of the best SON OF TOMAHAWK stories. Joe Kubert's cover is great, Frank Thorne's artwork is nice, and the message is good, but the story is uninspiring. If you're like me, it won't motivate you to go out and buy all the SON OF TOMAHAWK comics. 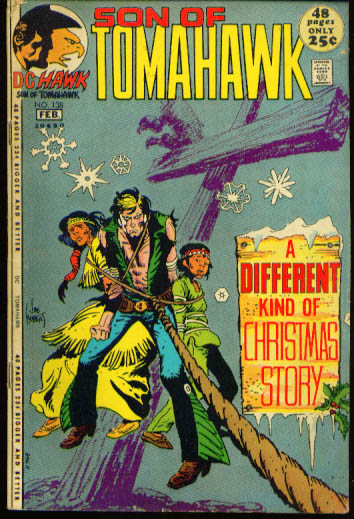