Pocahontas Revealed is an excellent Nova documentary on America's "Indian princess." Even though I've read a lot about Pocahontas, I learned things. Telling you things you didn't know, filling the gaps in your knowledge, is a mark of good filmmaking.

Pocahontas Revealed focuses on the discovery of Werewocomoco, the home of Powhatan and Pocahontas. It explores several mysteries about the site. What was the purpose of two 700-foot-long ditches? Do a few post holes show the location of Powhatan's longhouse? Do the bits of copper found come from Native sources in the Great Lakes or from Great Britain? Can tree rings tell us why the Indians stopped helping Jamestown after seven months of cooperation?

So the documentary isn't just a laundry list of "this happened, this happened, and this happened," which inevitably gets boring. Rather it presents a series of revelations as the information is uncovered. Moreover, it uses computer graphics and staged recreations to enhance the narrative, making the story fun.

Here are some of the things I gleaned from Pocahontas Revealed.


Left unsaid is the exact nature of the trade. The Englishmen were trading what they considered worthless refuse for valuable foodstuffs. But the Indians may have thought, "Look at this highly processed metal ore. Think how much effort it took to mine it, smelt it, pound it into sheets, and ship it overseas. For this they want a few baskets of food they could easily grow themselves? Suckers!"


In short, Pocahontas Revealed is about as good as historical documentaries get. If you have a chance, see it. Rob's rating: 8.5 of 10. 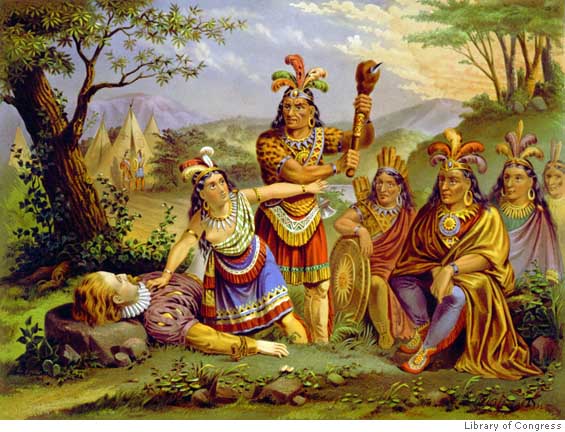 "When Smith and company arrived in Virginia, the Indians attacked them with bows and arrows. They knew about the white man from Roanoke and prior Spanish explorations. Their arrows seemed to be an explicit message: Go home...you're not wanted here...no trespassers allowed."

Sounds like a perfect example of the 'shoot first ask questions later' mentality you're always ranting about.

I'm not grokking your review system, Rob. "Lonesome Dove" is rather problematic, and gets 7.5 out of 10 from you. This documentary gets all-around glowing praise, and is only ranked one point higher, at 8.5 out of 10.

For my response to your comment, Anonymous, see Shoot First, Ask Questions Later?

For an answer to your question, DMarks, see My Rating System Explained.