Trejo a New Ager in Sherrybaby?

First, it's clear that none of the traits I listed (ponytail, venison stew, smudging) proves he's a Native. Many non-Natives indulge in these things too. But it's the combination of traits that matters, not each individual trait. Anyone who qualifies on all three traits is likely to be an Indian.

Let's do some math. Suppose there's a 79% chance each trait is possessed by a non-Native and a 21% chance it's possessed by a Native. (The reason for choosing 79% will become clear.) Spelling it out:

If you factor in the location, I'd say you could safely lower the percentages a few points. So let's assume the numbers actually look like this:

It's an unfortunate fact that Natives suffer more substance-abuse problems per capita than other ethnic groups. If a person has an addiction, as Walker does, let's assume there's a 97% chance he's non-Native and a 3% chance's he's Native. We multiply that with the previous result:

There's also the meta-evidence of Danny Trejo's career. One, he's Latino, which means there's a good chance he has Indian ancestors. Two, he's played an Indian or a part-Indian several times.

Why would you cast Trejo in the role if you meant Walker to be a non-Native New Ager? When people see Trejo on the screen, they think "Indian or part-Indian or Latino with Indian roots." They don't think "non-Native who indulges in New Age practices and coincidentally resembles an Indian."

Finally, most reviews of Sherrybaby didn't say anything about Trejo's ethnicity, but at least one did:Based on all this evidence, I conclude Walker is probably an Indian. QED. 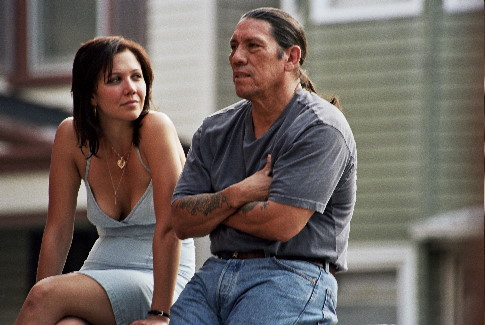 A brilliant example of circumstantial reasoning that utilizes math in ways that most people (myself included) are probably not accustomed to.

However, my initial premise was that since Trejo was never positively identified as Indian at any point in the movie, he most likely was not.

He is actually what I have come to call an "urbanized Indian fantasy figure" in that people see an Indian where they want to see an Indian - especially in New Jersey (where I have been to on many an occasion and where Indians have long gone the way of the dodo bird).

I would cast him as a Hispanic dope fiend who wears a ponytail because it's hip and who is also an ex-con who learned Indian ways in the joint.

I know an older Mexican-American guy out in L.A. named "Cat" who is a West Coast version of Trejo's character, complete with the "Indian look" - only he's been clean and sober for thirty-five years (I might add that from what I read about Trejo's "Walker" it was unclear whether or not he was clean).

Either way, head out to the major cities of both coasts and you will eventually encounter older Hispanic men of the "Walker" mold in absolute droves.

I neglected to mention that "Cat" also smudges, attends sweats and has fully devoted himself to the practice of Lakota spirituality, thus endearing him to many an adoring white female New Age zealot over the years.


I actually met Trejo in person at a Santa Monica rehab center where my younger sister was seeking treatment for meth addiction. Trejo's drug of choice and subsequent addiction was cocaine. He's a down to earth hispanic man, he stands about 5'5, very rugged looking. I asked Mr. Trejo if he was part Native.

Mr. Trejo told me that he occasionally sports a pony-tail to obtain work, sometimes as an Indian, as an actor he has to "play" Indian roles to make money, despite the fact that he is Hispanic.

Now, a long, drawn out and to be quite honest, incoherent mathematical equation is how a typical non-Indian would try and explain a concept and race of people that non-Indians will never understand. In other words your absurd percentages mean nothing to Indian people.

There is an agency, you may not be familiar with it, called the BIA (Bureau of Indian Affairs) that has used mathematics, fractions to be exact, to assign a BQ (Blood Quantum) to us Indians. For example, according to the BIA I am 21/32nd Oglala, Lakota. The problem we Indians have is this: How do non-Indians determine their BQ system based primarily on just the names of our ancestor on a flow chart?

Mathematics in the context you apply it to Indians shows just how maladroit and racist you are in your basic comprehension of a culture your DNA does not permit you to understand. Lowering Indians down to mundane math percentages is similar to way the 7th Calvary used to refer to us Indians as "savages" in order to dehumanize us, which in turn almost justified their massacre of hundreds of thousands of innocent, non-combatant Indian women and children and elders. An American Indian Holocaust took place in North America over a span of 600 years.

The Nazi's tattooed numbers on the Jews in their concentration camps. Like you, they assigned a numeric system to commit acts against humanity, the Nazi's were good at playing the numbers game too. Not to say that you yourself are a Neo-Nazi, however, your use of mathematics to infer "Indianness" implies that you may be.

An an American Indian man I do not fault you for knowing completely nothing about my culture. One of the most inane statements I ever read on the net was in some Indian forum where this Mexican person said that "Because of his ponytail, he get's mistaken for Indian all the time".

I used to sport my jet black pony-tail down to the small of my back until I grew tired of people, mainly white people coming up to me and asking me questions like: "Hey man, you're Indian huh?" or "I am part Cherokee" for some reason white people love claiming Cherokee.

It's ironic that you would cast Mr. Trejo as a "dope fiend" because he used to be one in real life. Brown skin and a pony-tail does not make one an "urban Indian". I know what Danny Trejo would say if you presented your misinformed and racist mathematical equation to him: "That shit is stupid holmz, I am not Indian, I just act as one to make a living".

A lack of identification doesn't tell us anything, Melvin. A lot of Indians don't get identified as such in movies, TV shows, and so forth. You have to infer they're Indians, which is what I've done.

Do your aging Latino acquaintances also eat venison stew? Because that's one of the three factors I'm talking about. Again, it's the combination of these traits that makes the ID possible. A guy with a ponytail who smudges doesn't qualify; he has to have all three traits.

I Googled "venison stew" and "Latino" and got a mere 2,640 hits. None of them seemed to be about Latinos who eat venison stew. As far as I know, venison stew isn't part of Latino culture. It's a good indicator that Walker isn't Latino.

An "ex-con who learned Indian ways in the joint" is possible, of course. But many prisons don't allow spiritual practices such as smudging. And prisoners can't learn to cook venison stew because it isn't available there. So I don't buy this theory.

P.S. Melvin used the phrase "dope fiend," J., not me. You might want to learn to read a little better.

For my response to the rest of your comments, J., see Trejo and Calculating "Indian-ness." Enjoy!

Trejo is Mexican, correct? If he is Mexican, and brown, then he is Indian. He doesn't look like a Spaniard to me so lets use some sense guys the man is "Indian enough" racially/ethnically even if he doesn't "identify" as Indian.

Danny trejo clearly is an american indian dark brown skin striaght black hair even looks like U.S. Native american actor wes studi what more do you want!! O he is mexican therefore he is hispanic well my friend that is false!!! Hispanic is just a racist term to combine all of south america and carribean people into one marketing group. If you know your history Mexico was filled with american indian people, have your ever heard of aztec,mayan, etc he cleary is direct descendt of these peoople like most mexicans are . Just like United states Mexico too is home to all different races but native american being the majority.

Your answer is wrong Mexico is just a country it is not a race. If you know your history mexico just like united states was filled with native american indains I.e. Aztec mayan etc. He is cleary part native american he even played an indian in french film called Le jaguar and played father to U.S. Native american Rudy youngblood in beatdown so please get your facts straight.

I didn't use the words "Mexico" or "Mexican" in this posting, InkaWarrior. You should be more precise when you say someone is wrong.

I know many Mexicans and other Latinos have Indian blood. That alone doesn't make them Native. If it did, Latinos and Indians would be indistinguishable and we wouldn't have two categories for them.

@ Rob- So having native blood does not make you native ? That comment makes no sense you clearly are confuse what latino is. Latino is not a race buddy any race can be so called latino. For example David Ortiz famous baseball player is a black man however he is latino he speaks Spanish has a spanish last name cultural is a latino racially is a black man get it? Danny trejo culturally is latino however racially he is native like alot of mexicans.Do you know what colonialism is?An American Indian mexican doesnt not speak there native tongue because Spanish rape the native culture right down to our language, our names, our religion. So you get alot of brown ppl who now have latino culture instead of an indigenous one.