Can Indian costumes be educational?

One woman tries to justify her daughter's Halloween costume:

Is it Ever Okay for Your Kid to Dress as Another Ethnicity for Halloween?

By Joslyn GrayComment:  It sounds like the daughter was talking more about the past than the present.

So Joslyn Gray's position is that if you're well-off and well-educated, with a lot of spare time and the ability to sew, you can make a genuine costume and educate your children. In other words, if you're one in a million Americans--i.e., if you're Joslyn Gray--it's okay to dress your children as Indians.

I don't see much value to asserting the positive case. The negative case is the point here. The vast majority of Americans--virtually everyone--should not dress their kids as Indians. Only if you're willing to do an inordinate amount of work should you even think about it.

Gray has done everything she could to make the Halloween costume a positive experience. But even with the educational component, I'm not persuaded by her arguments.

For starters, as I said, the costume and the history lesson reinforce the idea of Indians as primitive people of the past. What can the daughter tell us about the present-day circumstances of the Lenni Lenape? Anything?

Also, the whole thing reinforces the idea that cultural appropriation is okay. That an Indian identity is available for the taking. That non-Indians get to decide whether and how they can exploit Indians.

None of this seems okay to me. How about telling the daughter, "No, you can't dress as an Indian. There's no reason you should get something just because you want it.

"If you're interested in Indians, we'll get some books and movies and learn about them. Perhaps we can visit them and buy some of their art and crafts.

"Meanwhile, you can be a ghost or pirate or whatever. You don't need to be an Indian."

Below:  Not the author's daughter, I hope. 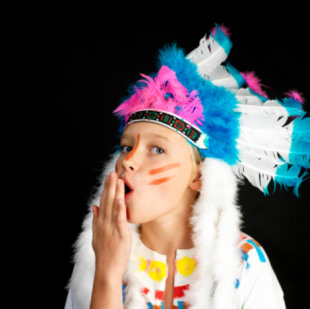