Inca temple in Agents of SHIELD

In the second episode of Marvel's Agents of SHIELD, titled 0-8-4 (airdate: 10/1/13), an archaeological report brings the team to Peru.

They arrive at an "Incan" temple that looks exactly like a Maya pyramid. The two cultures are unrelated and have little or nothing in common, of course. The Inca didn't build pyramids.

Portraying the two cultures as interchangeable or the same is enough to earn this episode a Stereotype of the Month entry. But there's more.

The archaeologist tells them the temple is at least 500 years old, and is filled with pre-Incan artifacts. It also contains a strange metal object.

If the temple were pre-Incan, it would have to be at least 675 years old, since the Inca empire began around 1438. If it were pre-Incan or Incan, it's almost unnecessary to say it's at least 500 years old. It couldn't be much newer than 500 years old since Pizarro conquered the Inca in 1533.

The temple's entrance chamber has wooden beams across the ceiling. They would've decayed long ago.

The far wall has a carving I couldn't identify from a brief glance. The metal artifact is embedded in the carving.

In perhaps the episode's most ridiculous moment, the geeky scientist Simmons adds:It doesn't matter how old the rock is. As I just said, the artifact is embedded in a carving on the flat, manmade wall, not in a natural formation.

To determine the chamber's age, you'd look at the tree rings in the wood, the patina on the stone surfaces, or perhaps the radioactive decay of trace elements. As for the artifact, it would have to be newer than the carving since the carving came first. 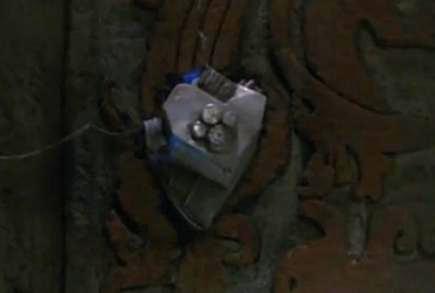 In one of the episode's best exchanges, we learn why the police have arrived:This refers to the indigenous protests against the government-sanctioned mineral extraction by multinational corporations.

Ward's spin is unnecessarily negative. The Indians aren't "rebels" so much as citizens expecting the government to live up to its promises. They're fighting to have a voice in decisions affecting their land and resources.

And their protests are usually peaceful until the government responds with military force. In the ensuing confrontations, it's usually the Indians who wind up dead.

Later, the Peruvian commander Camilla Reyes how the artifact originated. Nazis fled to the region after World War II and built a weapon. But it was "lost in a clash in the jungle."

Apparently someone activated it and it flew through the air, into the temple, and smashed into the far wall. That the device missed the temple's exterior is a miracle, as is the entrance being open rather than covered with centuries of debris.

Unlike, say, the Mohawk shaman in Sleepy Hollow, there's nothing good about this episode from a Native standpoint. Unless you count an indigenous ruin as a positive no matter how phony it is.
Posted by Rob at 12:00 PM

Email ThisBlogThis!Share to TwitterShare to FacebookShare to Pinterest
Labels: Inca, Stereotype of the Month, stereotypes, TV