The rationales for changing the "Redskins" name keep coming. Here's a philosophical one:

The name controversy's gone national (even the president's weighed in), and some fans are calling for a change

By Daniel D'AddarioStill fighting the Indian Wars, relegating Indians to the past, putting them under white management, erasing their history and humanity...yes to all this article's arguments. I've said similar things many times. Indian mascots are a symbolic way of keep Indians poor and humble under the white man's thumb.

Here's an explanation of why "Redskins" polls are bogus:

Think no one cares about the Redskins' team name? Visit a reservation

Yes, Native Americans feel there are bigger issues in the US than a bad NFL mascot, but that doesn't mean it's not offensive

By Dana Lone HillBingo! Someone finally asked the right question. It's not whether the team name bothers Indians in the abstract. Or whether they'd waste time changing the name. It's whether "redskins" is an insult or not on a personal level. And the answer is a unanimous yes, it is.

As I tweeted:These are four different questions, if not more. Yet polls treat them as if they're the same and blur the answers.

Let's see what happens when polls ask, "Would you call an Indian a 'redskin' to his or her face?" Until then, they're dodging the issue of whether the name is an ethnic slur. 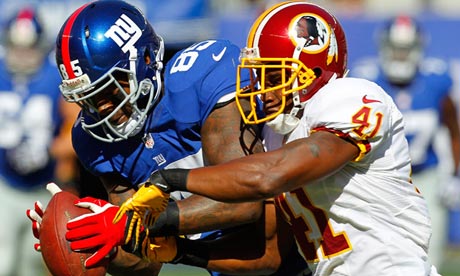