In an episode of Cougar Town, titled It'll All Work Out (airdate: 5/15/12), Jules wants to hold Thanksgiving in the spring, when her friends and family are available.

To "celebrate," her friend Laurie wears a Halloween/Thanksgiving/Christmas outfit because she screwed up the previous holiday season. As Laurie put it:Her outfit consists of a headband-like cord around her head, braids with feathers hanging from them, a short fringed vest, and a bone breastplate--all worn over a sexy Santa dress. You can see in the image below. 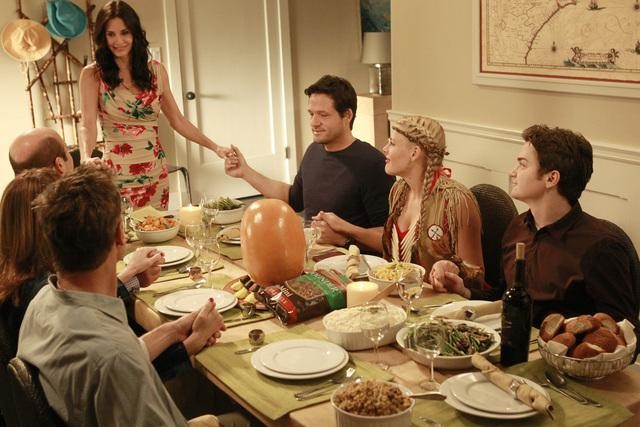 As is often the case, this bit has an uncertain effect. On the one hand, the Laurie character is dumb, and another character tells her the costume is crazy. Viewers could conclude that dressing like a faux Indian is a bad thing to do.

On the other hand, she wears the outfit for the rest of the show. And no one explicitly the costume is wrong--that it's racist or it stereotypes Indians. Viewers could conclude that if you want to be wacky and unconventional, there's nothing wrong with pretending to be an Indian.

That's the kind of mixed message a TV show shouldn't present. A straightforward message is much better. For instance, "That costume is racist, Laurie. I'm offended, so please change it."