The initial report about the "Got Land?" shirt controversy relied on quotes from Michelle Tittler. It described her thus:Sounds more or less benign, right? Well, Native activists got into a Twitter war with Bonnie Allen of CBC, who published the article:

Tanya Kappo ‏@Nehiyahskwew Jan 17
#CBC interviewing a woman who spews vile hatred at First Nations is like asking the KKK in the 60s their opinion on civil rights. #GotLand

Bonnie Allen ‏@bonnieallenCBC Jan 17
@cmyrden when there are allegations of harassment, I try to find out who might be behind it and why. It's what journalists do.

Coty S ‏@cytolysis Jan 17
@bonnieallenCBC @cmyrden journalists also properly disclose these groups for what they are, which is not 'political activists'

Sandy MacDonald ‏@SandyMacDon4ld Jan 16
@bonnieallenCBC Thought you might be interested in the hate group run by your "Got Land?" interviewee:
https://www.facebook.com/ENDRACEBASEDLAW/posts/445849455517293:0

Bonnie Allen ‏@bonnieallenCBC Jan 16
@SandyMacDon4ld I'm well aware of her campaign. That's why we interviewed her.

Bonnie Allen ‏@bonnieallenCBC Jan 17
@SandyMacDon4ld I was referencing her campaign to email & phone the school division; journalists MUST speak to people. That's our job.

âpihtawikosisân ‏@apihtawikosisan Jan 17
The idea that it is somehow balanced journalism to get a virulent racist on one side and a 13 year old native child on the other, is FUCKED.

What racism and hatred are the activists talking about? Well, they uncovered Tittler's Facebook page:

A Google doc that shows someone with the same last name--perhaps her husband or father--owns an oilsands company. Many Natives are vehemently opposed to harming the environment by dredging the oilsands.

A sentencing record for what looks like harassment--fear of injury/damage by another person--by Tittler of others.

For all we know, Tittler may be the only member of End Race Based Law. If she files a complaint with Canada's human rights commission, I guess it's news even if she's a lone crank.

But her critics have a point. What qualifies her to be the spokesperson for anyone who has a problem with the shirt? And "co-founder of a nonprofit" is much too mild for someone who sounds like other anti-Indian activists. I.e., someone who wants to end tribal sovereignty and eliminate tribes as separate entities.

Incidentally, journalist Suzette Brewer notes the basic problem with the notion of ending "race-based laws":By "these organizations," Brewer means the conservative Christian groups who fought to remove Baby Veronica from her biological father. Like ERBL, these groups want to end tribal sovereignty so they can divide, conquer, and Christianize Indians. 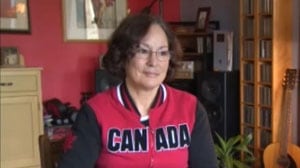