A debate on whether the non-Native actress Lynn Collins should've played the Blackfeet woman Silver Fox in Wolverine.

Why is she playing a Native American?Comment:  Naturally, I agreed with WasDreaminWhenIwroteThis and disagreed with his critics. To see my responses, go to page 4 and page 5 of this thread.

Note:  I fixed some of the spelling and punctuation in these messages to make them more readable. 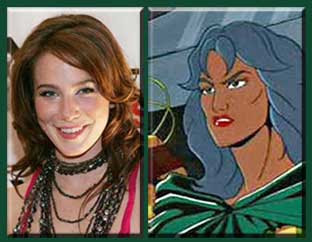 I am sure given a search amongst N.A. actresses they could have found one that suited the role. Rarely do we see an actor of mixed background or of color placed in a role that was meant for a caucasian without the role being tweaked or rewritten so that "stereotypes" or "issues" relating to their ethnic leanings feed into the roll. We have yet to reach the point where actors are placed in roles because they are good actors. Until then I will probably always have issue especially when the actors on screen continue to define being N.A. in a way that I can't see friends or family reflected there...

Lynn Collins is part American Indian. I've read it on several credible interviews. Having some background cultural knowledge/experience is what counts in this case, not race. Race doesn't really exist. Culture certainly does. Ask any anthropologist or geneticist. I support her 100%.

BTW, I have some Ojibwe heritage.

In this case, you have a character who is by inference or direct claim to be NDN. Why not cast it with someone who is Native? It's not because NDN talent isn't out there. The idea that you have to cast non-Native actors/actresses because there is not enough talent out there is ludicrous. There are thousands of talented performers from Indian Country. If they are not being cast in roles it's because filmmakers are either lazy (not wanting to do the little research required to find talent), ignorant (assuming there aren't any Native talent that could possibly play the role which is being cast), culturally insensitive & not caring about accuracy ("hey, let's throw so-and-so in there & call it a day cause they "look" native). Doing so just feeds into stereotypes and lets non-Natives define who we are, what "looks" NDN, and what we are capable of doing/performing. There are plenty of us (full-blooded & mixed) who can portray any number of roles if given the chance. This is an extreme example, but would you cast someone from Ireland to play an African or Pakistani?