By Cindy YurthAnd:And:Comment:  I agree with the curator about the mythologizing of the codetalkers. They did a great job, but did they really win the war in the Pacific theater?

I'd love to see historians rank the top 10 or 100 military feats in World War II. I wonder where or even whether the codetalkers would place on this list. 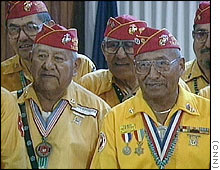