Alas, one can find stories such as this one several times a month:

Our view:  Congress needs to consider how barrier could disrupt binational cultureComment:  So the US ignores its own laws to trample and subdivide indigenous land? That's colonialism in action right here.

For more on Peru, see The Amazon Tiananmen and "Sedition" and "Savages" in Peru. For more on colonialism in general, see Those Evil Europeans. 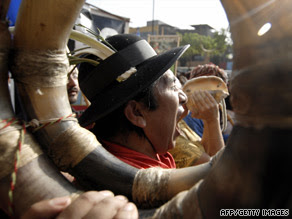 Defense of property rights wins out this time.