In "Two Peoples--One Struggle" reader Stephen ranted about the Israeli-Palestinian conflict:Says the religious bigot. Besides Muslims, are there any other groups of people you feel self-righteously superior to?

In a previous posting, I told you some of what I know about the Palestinians. I laughed uproariously at your use of WorldNetDaily.com as a source of "information."

Now I'll tell you some of what I know about Israel's occupation of the West Bank and Gaza Strip. Maybe you won't sound so ignorant the next time you open your mouth.

Status of territories captured by Israel--Occupied"Occupied" vs. "Disputed" territoriesIf you want to challenge my sources, go ahead. Edit the Wikipedia entries and correct what you consider the mistakes. Watch how fast people correct your "corrections." That's because Wikipedia, unlike your source, tries to be fair and balanced.

Even the Israeli High Court agrees that "Judea and Samaria" [West Bank] and the Gaza area are lands seized during warfare, and are not part of Israel." Do you have anything to say to that?

If most of the world preferred the term "disputed" to "occupied," you might have a point. But most of the world prefers "occupied" to "disputed." Your claim is stupid semantics at best, false or misleading rubbish at worst.Yes, occupiers such as Israel rarely admit that their occupations violate international law. And people accused of crimes rarely admit they're guilty. So the hell what?The problem with this example is that there's no consensus about Kashmir. There is a consensus about Israel's illegal occupation of the West Bank and Gaza Strip. Hence the UN resolutions and "road maps" calling for the return of these territories.

In short, the status of Israel's occupied territories isn't "hotly disputed" by anyone except Israel. Therefore, the word "occupied" is more appropriate than "disputed."That's because most territory is typically under someone's sovereign control. And not because it's a requirement of the definition of "occupation."

Conquest = self-defense?!Israel's war of self-defense ended when it regained control of its fixed borders. When it overstepped those borders, it turned legitimate self-defense into an illegitimate invasion and occupation.

Anything else you need to know? Next time, do some research on something other than your rabidly right-wing websites. Then you'll learn there are plenty of arguments you've missed. Anyone who thinks there's a clearcut answer to any aspect of the Israeli-Palestinian conflict is even stupider than he seems.

Here's a clue, bright boy: If you don't want to look like a total intellectual fraud, present both sides of the issue next time. Don't waste my time telling me how much smarter you are when you're too prejudiced to acknowledge the "occupation" controversy. I'm willing to note both sides because I'm interested in the truth. Other than sheer stupidity, what's your excuse for your ideological blindness?

For more on the subject, see The Indian-Palestinian Connection.

P.S. I've disabled comments on this and the previous posting because of your obvious penchant for inundating me with irrelevant arguments. As I told you before, you're not cluttering my blog with your insults and attacks. If you have something to say, start your own blog and post your rebuttal there. Or e-mail your comments and I'll consider whether they're relevant to my mission.

You know, the mission I stated at the top of the blog? The one you're apparently too stupid to understand? Yes, the intersection of Native America and pop culture...that mission. 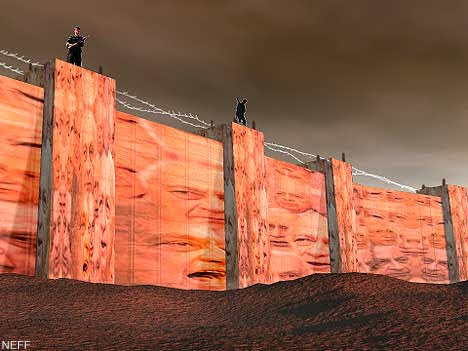