Here's a little-known "Native" character who's back in the news:

I read these comics when they came out. I didn't think much about them. They were okay for the same reason Tarzan comics were okay: exotic jungle adventures.

I think RIMA was reasonably sensitive to the indigenous people it portrayed. But you can't get past the central flaw: a white girl who's a better Native than the Natives around her. Whenever there was a problem--avaricious white men who wanted to clearcut the trees, a lost official or missionary, a forest fire--it was Rima to the rescue. The Natives were reactive while she was proactive.

But now the Racialicious blog informs us that Rima is making a comeback:

By Arturo R. GarcíaThe teaser copy says:García continues:A blogger named BGF (Black...Geek...and Fine With It) puts a snarky spin on this that begins:Comment:  The original Rima was racist and stereotypical in almost every way and the new version apparently will be the same.

Really, what's the justification for perpetuating the "white Indian" stereotype? "They did it a century ago, so it's okay to do it now, because we're just reiterating what they did"? Wrong.

Would you use that excuse to do an Uncle Tom, Aunt Jemima, or Amos 'n' Andy comic book? No? Then what's your excuse for this comic? There is no excuse that I can see.

Here's a deep thought. How about updating Rima by making her an actual Native? You know, a brown-skinned Amazon Indian who's five feet tall with a bowl haircut, some uncomfortable piercings or tattoos, and a child on her hip? Or would that be too exotic for Eurocentric audiences?

If you want to reference the old Rima, say the new Rima is her great-granddaughter. She's interested in white people because one of her eight great-grandparents was a strange white woman. But this Rima is wholly Native except for a bit of non-Native blood.

Below:  One of countless "white Indians" readers could identify with because she wasn't a brown-skinned savage. 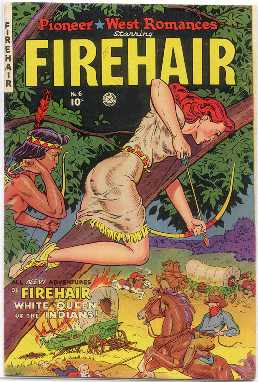 This is an excellent post, and I will be referring (not linking, no blog) several people to it!

Nor were things much different in other areas of racially-tinged literature. You might meet an exotic Asian or Arab princess because their "olive" skins and long, luxurious black hair weren't too "unnatural." But you almost always found a white woman in place of anyone who might be too brown or black--i.e., too African or indigenous. For instance, Ayesha or Sheena the Jungle Queen. Apparently nothing has changed since then.