A big stories in Indian country this month has been the housing crisis on Attawapiskat reserve in northern Ontario. It's going through the usual spin cycle. Politicians are shocked that poverty still exists in Canada. Indians say they aren't getting enough funding to build decent houses. Critics say the tribal government is responsible for wasting money.

There's more than a whiff of racism surrounding the issue. The non-Indians didn't care enough to do anything until the media proclaimed it a crisis. Their attitude seems to be that giving money to Indians is like pouring it down the drain. You know, because Indians are uncivilized savages who haven't learned how to take care of themselves.

I haven't posted anything on this because it's not really a pop-culture issue. But this story is enough to justify a posting:

Below:  "Steel shipping containers are being used to house workers at Ontario Power Generation's Lower Mattagami hydro project. The containers will later be turned into housing for the Moose Cree First Nation." (Courtesy Steve Marshall) 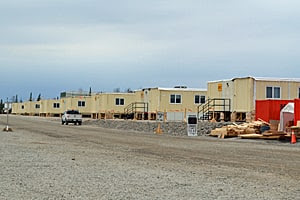