No Indians in X-Men movies

By Eric OlsonAnd:Comment:  The X-Men have more Native characters than just Dani Moonstar (Mirage) and Warpath. There's Thunderbird, the original Native X-Man, who died soon after being introduced but still appears in alternate realities. Forge, who was a mainstay of the X-Men and X-Factor for years. And Shaman of Alpha Flight, who was introduced in the X-Men comics but isn't a member.

Thunderbird fits the "savage" model, but I'm not sure Forge fits the "noble" model. He's abandoned his cultural and religious heritage for the world of technology, so he may be the most realistic character of the bunch.

But Olson's basic point is valid. These characters are all superficial representations of what it means to be Native.

For more on the subject, see Predator Has Best Native Superhero? and Thunderbird in Future X-Men Movie? 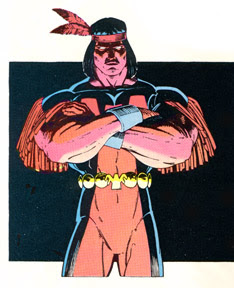 Well, Thunderbird died quickly. That has its own issues. Really, most Marvel Indians are more on the magical end of the sliding scale of magic versus realism. Same with the aborigines, judging by House of M.

Forge is probably the only non-magical Indian Marvel's ever written, and only then by immersing himself in modern (and beyond-modern) tech.