Review of 500 Years of Resistance

The 500 Years of Resistance Comic Book 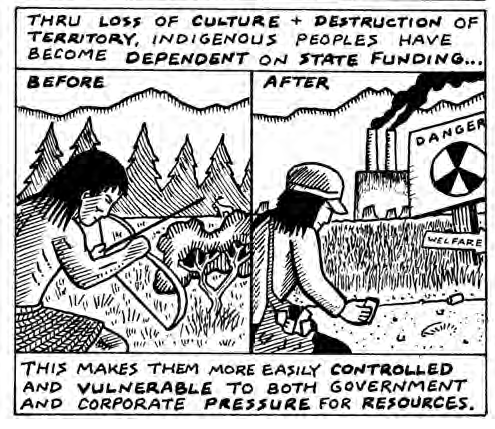 My reaction is closer to the Booklist review than to the official blurb. In fact, I'd say Booklist understates the book's problems.

Let's start with Ward Churchill's introduction. It goes on for fourteen pages plus five pages of footnotes. Most of those pages are Churchill talking about his own adventures. Only in the last couple of pages does he mention Gord Hill's book.

Churchill claims he had to talk about his own resistance before he could talk about the book's. One could summarize his message in three words: Remember the past. Everything else in the intro is puffery designed to show how significant Churchill and his antics are.

The concept of 500 Years of Resistance is a good one. By focusing only on acts of resistance, it shows how Native took charge of their own fates. They didn't wait around for disease and warfare to conquer them; they fought back.

But the list of events covered in second paragraph (above) is misleading. Hill devotes only two pages to "The War on the Plains," which most people would say was the climax of the Indian Wars. He follows that with eight pages of "The War on the Coast"--British and other European attacks in the Pacific Northwest.

Most of the incidents are minor: a skirmish or raid here, a bit of gun or cannon fire there. Hill obviously wants to include his British Columbian history, but he doesn't make a case for spending so much space on it. The section skews the whole work; it makes you wonder about Hill's agenda.

The same is true of the rest of the book, which covers the following subjects with the given number of pages:

I hadn't heard about Ts'Peten and don't know anything about Aazhoodena, so I question the space devoted to them. Again, Hill doesn't make a case for the significance of these events. It's clear he wanted to highlight lesser-known events in Canada, but again, it skews the book's coverage.

That's ten of 25 pages, or 40%, on recent events that few have heard of. Meanwhile, there's nothing about the tobacco battles in upstate New York, the Navajo battles against coal mining in Arizona, the Dann sisters' land battles in Nevada, or the gaming battles throughout the US. Each of these deserves one or two pages in a book about Native resistance.

Hill might've been better off focusing his book on the resistance in Canada, because that's where his heart seems to lie. Really, the book's title could be 500 Years of Resistance That's Important to Me or something like that. Few would say he included all the highlights of Native history in an evenhanded manner. Unfortunately, that makes the book less useful than it could be to the uninitiated. 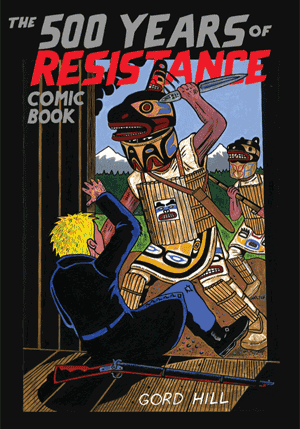