Yesterday I posted this link about a black professor's tweets to Facebook:

I tagged the posting with this line:

I'd tweet that my ancestors were land thieves and slave-owners too if I knew it for sure.

I don't understand the Ben Affleck "sanitize one's history" approach. I've posted before about my ancestor who may have massacred Indians.

Why wouldn't I? The only way it reflects on me is by showing how forthright I am.

If you go back enough generations, everyone's related to someone "bad." It probably doesn't require that many generations, either. Maybe half a dozen.

For every king or president in your family tree, you probably have several rapists, slave-owners, murderers, and so forth. Everyone does.

I wouldn't give people a pass because their ancestors lived in Europe. Those people financed and managed the conquest of America and the slave trade. As well as oppressing their own people.

I wouldn't give people a pass if their ancestors came over "only" a few decades ago, either. Once you're here, you become complicit in the system. If you're not part of the solution, you're part of the problem.

If people came over in 2015, I might give them a pass. They missed the last national election, so they haven't had much chance to change the system.

A couple of Professor Grundy's tweets focused on Native history: 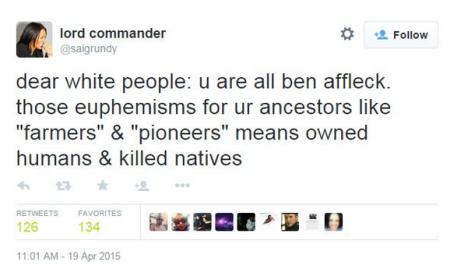 One Facebook friend criticized Grundy for these tweets:My responses:

I don't have a problem with Grundy's five tweets. I'd try to avoid saying "all," as in all white people are Ben Affleck. But the percentage who call their ancestors benign terms like "pioneers" and "farmers" must be incredibly high. Perhaps 90-95% or more. So "all" isn't much of an exaggeration.

Most Americans accepted a system in which some of them owned slaves or killed Natives. For the sake of argument, it doesn't matter much if most Americans benefited from theses crimes directly or indirectly. The point is they were complicit: guilty of aiding and abetting crimes against humanity. They were not innocent "farmers" and "pioneers."

And again, no free passes for recent immigrants. Americans of every vintage are fighting against treaty rights, land-into-trust deals, and casino expansions. They're building on sacred sites such as Mauna Kea or Mt. Graham, or allowing it.

Unless recent immigrants are willing to stand up against these practices, and call their fellow Americans "land thieves," they might as well be land thieves themselves. Again, they're part of the solution or part of the problem. They don't get to be neutral if they're US citizens with the right to vote.

"She paints with the same broad brush and selective history"...you realize these are 140-character tweets, right? It's nutty to expect a nuanced argument in that limited space.

I'm guessing her academic papers and teachings are as nuanced as anyone else's. It's ridiculous to chastise her for being slightly inflammatory when she makes a completely valid point. Namely, that the word "pioneer" is a euphemism for people who routinely broke treaties, invaded "foreign" territory, and introduced diseases. And sometimes killed Natives outright.

For more on America's colonization and genocide, see Whites Destroy Other People's Homes and America Constructed to Erase Indians. 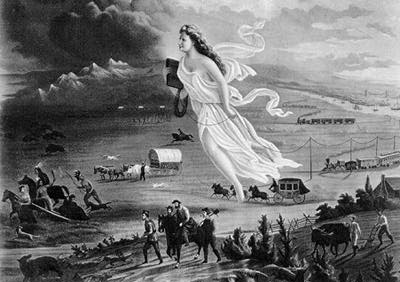