Russell:  Animal insanityAnd:Comment:  Exactly. But giving up greed means giving up what makes us uniquely American.

Below:  Some of the few remaining salmon. Non-Indians have depleted the ocean's stocks so badly that the US government has banned salmon fishing along much of the Pacific coast. Incredibly, we're running out of fish. 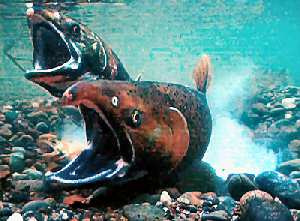 Writerfella here --
So, fixing global warming is everybody's problem. But everybody did not cause it. writerfella fully is aware of the 'Chinese Justice' principle underlying such a statement. A prime example can be illustrated in that Oklahoma City recently held a sales tax election to finance the hosting of a pro basketball franchise now called the Seattle Sonics. EVERYBODY will be paying that sales tax increase, most especially those who never will be able to afford $80+ game tickets or even more astronomical season tickets. As per usual, the rich will get richer and the poor...
By the bye, 'Chinese Justice' is that, if one in a hundred is guilty, execute all one hundred and you'll get your man.
All Best
Russ Bates
'writerfella'