I believe YAKARI AND THE BEAVERS is the third volume in the series. Here are some descriptions of it:

Yakari is a Sioux (Lakota) Indian boy. He’s a typical cartoon version of a cute little Indian. He wears a headband, which makes him look Apache, and a single feather, which he supposedly earned in his first adventure.

In this story, Yakari doesn't interact with any adults. We see a few shots of the Sioux camp with men and women going about their daily tasks amid tipis. These scenes look reasonably authentic.

The Sioux own horses and Yakari has Little Thunder, a pony. This suggests that the story takes place after the advent of the white man. But there are no signs of Europeans anywhere.

Yakari seems to live in an enchanted past where people and animals mix freely. Where the buffalo roam and the deer and the antelope play. Where seldom is heard a discouraging word, and the skies are not cloudy all day. (I just made that up.)

Despite the back-cover copy about the Great Prairie, Yakari's people reside in a forested area with moose and bears. I'd say it looks more like Minnesota—the Great Lakes region–than the plains or prairie.

The art is lovely, just short of spectacular. The drawings are technically skilled yet loose and animated. It's reminiscent of the best of Disney comics, when Disney was putting out the acclaimed Uncle Scrooge by Carl Barks.

As the text indicates, Yakari has adventures with his animal friends. He shoos a bear away, helps the beavers build their dam, and rescues one who gets lost downstream.

The cover (below) gives you an idea of the hijinks. A few beavers want to ride Little Thunder because they've never been on a horse before. But they get carried away and ruin Double-Tooth’s dam. Fortunately, Yakari is there to save the day.

The gentle tone reflects how some of us imagine traditional Indians. They're at ease with nature. They don't necessarily pray to or revere it, but they also don't hate or fear it. To them it's like a second home, comfortable and familiar. You wouldn’t worship your drapes or furniture and Yakari doesn’t worship the rocks or trees.

Talking to animals is a common feature of Indian stories, of course. Many tribes claim they used to be able to speak the animals’ language in the distant past, before their people grew corrupt and immoral. You can imagine that Yakari is so innocent he’s retained his ancestors’ ability.

The characters’ names are decent, ranging from the somewhat clichéd Rainbow and Little Thunder to the more appropriate Double-Tooth and Linden Tree. At least none of them are "Soaring" or "Brave" or "White."

What would educators say?

Perhaps the biggest shortcoming of YAKARI is its vagueness. Other than a single mention of the Sioux, there's no indication of Yakari's having a culture or a history. Apparently Derib and Job thought all Indians were the same.

But it could have been worse. Jeffrey said that in other books she's translated, the Indian characters spoke gibberish, mixing words from various tribes. Yakari may be a Sioux with no culture, but he’s not a mishmash of conflicting cultures.

Is YAKARI a good bet for children? Well, the price is right: about $10 for an oversized graphic novel with 44 pages of story. The books will amuse adults for a minute or two, but kids may treasure them and read them over and over.

Judging by the comments online, youngsters love the Yakari series. But I'm not sure if Native educators would recommend them. On the one hand, they tell a positive story about Indians and their love of nature. On the other hand, Yakari and his fellows are more generic than Sioux. And of course Lakota style Plains Indians are one of the biggest clichés in Native-themed literature.

Yakari or Rabbit and Bear Paws?

Speaking of which...it’s interesting to compare YAKARI with another children’s series I’ve written about: RABBIT AND BEAR PAWS. The two main characters, Rabbit and Bear Paws, are more goofy-looking and immature than Yakari. But they’re steeped in a real time and place. They meet French trappers and British redcoats, trade at forts and play lacrosse. That’s a lot richer than Yakari’s frolicking with beavers. RABBIT AND BEAR PAWS shows that Indians were and are real people, not fantasy figures in a magical Neverland.

YAKARI isn’t as divorced from reality as, say, Peter Pan or The Emperor’s New School. But it suffers from the same problem: separating Indians from their heritage. I suppose it’s too late now, but adding a few Lakota words and concepts to YAKARI would’ve made it better.

Hint to translator Jeffrey: If the publisher won’t modify the text, how about adding a text page or two? Maybe something explaining how Lakota children actually lived and played.

I’d give YAKARI AND THE BEAVERS maybe an 8.0 for its artistic tone and style and a 6.0 for its limited portrayal of Indian culture. Net rating: 7.0 of 10. 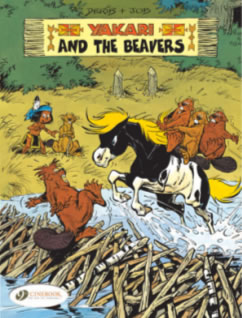 Looks like this is very similar to Asterix and Tintin, both in quality and in publishing format.

Minnesota is actually quite accurate as being the historic location of the Sioux (Lakota and Dakota).

It looks like that Yakari was adapted to TV/film once or twice, according to IMDB.

Here is one of several video clips I found of Yakari online:

Thanks for your thoughtful comments, Rob! I like your suggestion of adding a brief history to each of the books. In fact, one of Cinebook's other series includes such a page in several of its volumes.

Volume #1 of Yakari (Yakari and Great Eagle) introduces readers to Yakari's encounters with Great Eagle in his dreams; to his exploits that earn him his feather; and to his own discovery of his ability to speak with animals--as you mentioned, all common themes in some Native American narratives.

Dmarks, you're right: Yakari has been adapted to animation. In fact, a Yakari animated series airs on the French channel TV5Monde.