Mexico says no to exploitation

Why didn't Mel Gibson's Apocalypto have the cooperation of the Mexican government? Because Mexico protects its cultural heritage from commercial exploitation. Here's the story:

Treasures of a Nation, Not Fodder for an AdThe institute's other decisions:Comment:  I'm glad to see the institute rejected Apocalypto for its falsification of Maya history. It didn't stop Gibson from filming, but it may have slowed him down. More to the point, it prevented him from claiming the Maya and their descendants supported his apocalyptic vision.

Unlike Apocalypto, though, it's hard to see how the Hidalgo ad would hurt anything. It's promoting an interest in Mexico's history--literally trying to make it sexy. That seems like a decent idea to me. (It would be even better if they also used a male model to avoid the appearance of sexism.) 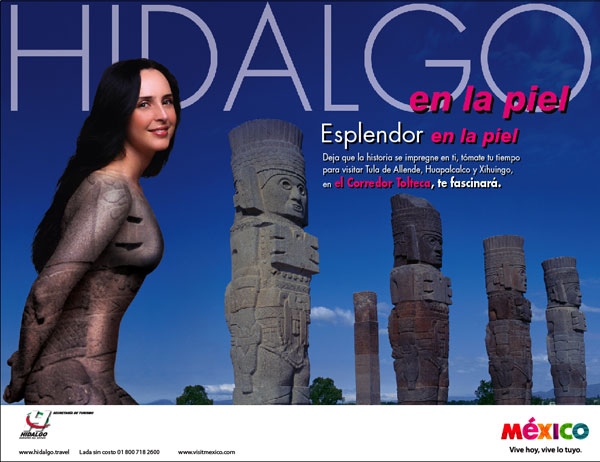 Is this the Mexican government actually censoring/banning advertising by others?

I gather Mexican copyright law gives control of the images to the government. So it's refusing to let some people use the images. It isn't censoring the images after people use them. If that makes a difference.

If the government bans some use, it is a form of censorship, even if before the fact. It seems like a cousin of sorts to bans on US flag-burning.

If you want to put it that way, perhaps.

A good analogy is with the US military's not permitting movies that intend to malign it use its bases or ships. I can see both sides of that argument. Should the military let producers use taxpayer resources to hurt it and thus reduce its effectiveness? If a movie causes a drop in enlistment, for instance, taxpayers will have to pay more to reach recruiting quotas.

As I said, the Hidalgo ad seems pretty innocuous. But Mel Gibson clearly intended to change the perception of the Maya from civilized and sophisticated to sick and sadistic. Should Mexico have helped him do it? Even if it meant film crews tramping through precious archaeological sites?

I don't think so. But that is the libertarian in me, for one thing. I don't think the government should waste money to assist the film crews of private corporations. That's a form of corporate welfare.