White super-race in The Paradise Syndrome

Part two of an analysis of The Paradise Syndrome, the original Star Trek episode about Indians. From Star Trek and History: Race-Ing Toward a White Future by Daniel Bernardi. 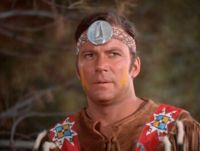 Writerfella here --
Interesting that Daniel Bernardi goes after Roddenberry more for "The Paradise Syndrome" than he does concerning Margaret Armen, the original author. Will have to read Bernardi in toto before adding much else to such an observation, but it still remains true. The writers in films and TV are disregarded for the most part, as though 'art by committee' leaves them out entirely...
All Best
Russ Bates
'writerfella'

I'll probably write something about the whole book eventually. In brief, it's a mishmash of astute and off-base criticism. Much of it is overly academic. Given your disdain of criticism, I doubt you'd like it.