Here's an article about teaching Indiana schoolchildren about Indians. Unfortunately, the effort hits a lot of sour notes.

As the story notes, "Potawatomi were the first settlers in Northwest Indiana." Although other Indians also lived in the area, let's focus on how authentically Potawatomi the teaching is.

Third-graders learn about area's American IndiansThe name "Grey Eagle" sounds like something thought up by a white-man wannabe. It's obviously supposed to convey the idea of a wise Indian elder.

As we'll see, this instruction has the effect of positioning Indians as people of the past. Even if the presenter is an Indian himself. That's bad.A Potawatomi guest would've been better than a Cherokee guest--i.e., someone who may have an Indian princess in his background.

The "three sisters" may have been staples in many areas, but they weren't staples everywhere. They weren't on the Pacific Coast, for instance.

"Sunflower" wouldn't sound as impressive in Potawatomi or another Native language. Traditionally Indians bestowed names based on some omen, and flowers aren't dynamic enough to convey a message. "Stands with a Fist" is a more realistic female name than "Lily," "Blossom," or "Dew Drop."

"Strong Turtle" and "Whistling Bird" are less stereotypical than the usual made-up names based on hawks or wolves. They actually might be real Indian names somewhere.

The ridiculous names suggest why this naming game is a bad idea. It encourages children to envision Indian cultures as shallow and "fun." See "Funny" Indian Names for more on the problems with turning a solemn ritual into a children's lark.The Potawatomis used canoes, but canoes weren't universal among Indians.It goes without saying that this practice is pure phony stereotyping. I've explained why it's bad several dozen times. See Girl Cries Over Indian Costume and Playing Indian for Thanksgiving for the latest examples.

I guess some tribes may have sung about eagles. They probably were just as likely to sing about fish or insects, but you never hear about those songs.

But I bet traditional Indians didn't sing about eagles any more than modern Americans do. They probably sang about the usual themes: life, death, fate, love, beauty, growing up, growing old, etc. Eagles and wolves are what New Agers and other wannabes think Indian cultures are all about.Another cliché. I wonder how many tribes actually had flutes and played them for entertainment. Not as many as you'd find in the Native music section of the record store, I'll bet.These may be legitimate bits of Potawatomi or Cherokee lore, though I wouldn't bet on it.

Here's a thought. Along with the traditional (i.e., outdated) lore and artifacts, how about showing the kids some modern Indian products? You know...hip-hop records, video games, skateboards, fashion designs, snack foods, etc. Anything to prove that Native are still alive and thriving. Still producing arts and crafts and other cultural goods to meet today's needs.

For more on the subject, see The Basic Indian Stereotypes.

Below:  Not your typical flute or basket. (A painting by Bunky Echo-Hawk.) 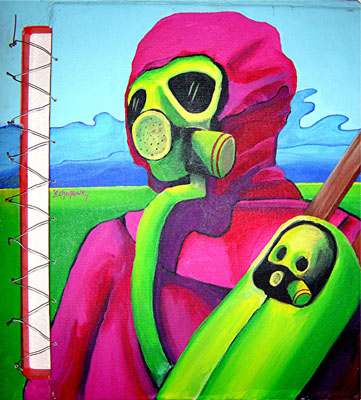 This made me sick when i saw it. I feel sorry for the misguided teachers and children, too. And to see that it has been going on for several years "under the radar" makes it even worse. It is particularly maddening that there are at least three nearby Native student organizations, as well as at least one intertribal organization of Indiana Native folks who could have been consulted. The kicker is that the Pokagon Band of Potawatomi community is less than 45 minutes away from the very school where this happened.

It is absolutely dumbfounding that no one questions this, that these children (and their teachers, apparently) are learning to view us as relics and 1940's Hollywood Western stereotypes.

I looked up lists of "Famous Native Americans" and found some Eagle names among them. The few I checked in more detail appeared to be real, and not wannabe's or from from fake tribes.

I guess "Eagle" names don't sound as hokey to me as names like "Dances With ____" or "Chief Mighty Tomahawk".

I find several references for this alongside "Native American". There is a Lakota translation apparently, "Tok'sa ake". But I find nothing to tie it to the Potawatomi.

This hurts me in my heart. What an idiot. I guess we should be grateful he didn't teach them to say "How."

The United States is rife with Indian frauds and wannabes of every description, even in that most desolate of places - Indiana.

Bodéwadmimwen is an endangered language with less than 15 fluent heritage speakers still alive. There is a website, www.neaseno.org, that is maintained by one of these fluent speakers, Don Perrot.

PR says....
As a teacher involved with this story...you have NO IDEA what you are talking about.Great care was taken to make sure we did present authentic accurate info and activities on the Potawatomi culture.We researched info on the internet, read many books by Native Americans especially the Potawatomi. We also used the web site listed in the blog to listen and learn a few Potawatomi words.We tried to immerse our students in the culture.

The author of this article did not take time to contact anyone involved with this story to know that. He just made up his own stereotypes of teachers, students and slandered a good man who has put his heart and sole into premoting all Native American cultures. You owe Grey Eagle an apology!

This article attacks a child, for being innocently enthusiastic. You people are sick racists who expect people to be understanding of you, but when do you begin to understand? When do you realize that you can NOT have your cake and eat it too?

It's a telling comment on the US education system that someone who claims to be a teacher misspells "soul" and "promoting".