Indians and tigers and sharks...oh my! 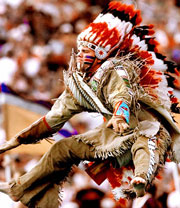 Comment:  Martin's point is similar to the point made by David P. Rider in "Indians" and Animals: A Comparative Essay. As Rider put it:
Posted by Rob at 8:10 PM

"The white man has always feared Indians as the most singularly hostile and fearsome opponents on the battlefields of yesteryear. Non-Indians still consider Indians worthy antagonists on a wide range of fronts--not only cultural but political socioeconomic fronts as well. What better method of psychological warfare to employ in the rarefied realm of athletic competition than historically rich symbols with the power to frighten one's adversaries?"


As an Indian man who grew up playing sports such as football, basketball and baseball all the way through high school I have never found the Indian mascot image offensive. Even when we played teams like the "Chiefs" or the "Seminoles". Perhaps I am so secure in my own unique heritage to really care. Do you think Sam Bradford would turn down a $100 million dollar contract offered by the Washington Redskins for example? People who have spoken out on the tired and irrelevant mascot issue are primarily non-Indian "do-gooders" trying to make name for themselves, like the countless anthropologists and "Native" historians before them, to sell a book or obtain academic recognition.

Professional sports and collegiate athletics choose to fly the Native mascot image because it empowers them to associate themselves with some of the most fearsome natural warriors in history. The plains Indians for example. Even the military honors the warrior spirit of Indians by naming their awesome weapons of war names like: The Tomahawk cruise missile, the Blackhawk and Apache attack helicopters, there was even a battleship that was attacked on Dec,7th 1941 at Pearl Harbor named the Oglala.

Whites honor us Indians, they want to be Indian, they want to go into battle with Indians or at least the image or name of a tribe on their jerseys. American Indians are synonymous with valor and bravery and reckless abandon who charged into battle prepared to die. Dying in battle was what "warriorhood" was all about. Today's modern warrior does not preoccupy himself with trivial matters like mascots. Leave that for the faux Native activists, the "weekend warrior", for the lack of a better term.

Today's' modern warrior concerns himself with how to feed his children or prevent his nephew from joining a gang or helping a sister addicted to crystal meth get sober. The Native mascot issue is important, however, it can be put on the backburner for now. We need to address social issues that threaten the survival of our people: Teen pregnancy, teen suicide, substance abuse, domestic violence and Third World conditions on the rez. Once we have conquered all of these issues then we can contemplate the stupidity of some white boy running around a football field in a comical monkey suit or other Indian costume.

You're either secure or apathetic about your heritage. I don't know which. ;-)

Yes, I understand athletes want to associate themselves with savage, warlike Indians who look and act like predatory animals. That's Melvin's and my point, not yours.

Smart multitaskers can deal with mascots and other pressing issues at the same time. Besides, some Indians consider stereotypes the worst Native problem.

I and others have addressed many of your claims in Team Names and Mascots, The Harm of Native Stereotyping:  Facts and Evidence, Indians in the Military, and Indians as Warriors. Read 'em and learn.