In Indians, Wizards, Fairies, and Ghouls, a blogger named Brooke denounced stereotypical Halloween costumes. This generated a typical debate on the subject, with defenders of racism trotting out the usual defenses of racism. (E.g., "stop being so sensitive," "this is just PC," "get over it.")

One anonymous commenter had slightly more original arguments, which correspondent DMarks and I responded to. This led to the following debate within a debate:

No one has said anything like "All costumes involving ethnically linked representations are racist," Anonymous. You know, the straw-man argument you keep putting falsely in quotes?

Brooke made it clear what she was talking about when she wrote:So why aren't you dealing with what she actually said? Is it because you can't, or you won't?

DMarks reiterated the point when he noted that no one is dressing up as a real Indian--e.g., Wilma Mankiller or John Herrington. If you disagree, post a link to anyone trick-or-treating as a 20th or 21st century Indian. Go ahead...we'll wait.

Hysterically, your comment about Liv Tyler proves our point, not yours. Cherokees didn't wear buckskin outfits like Disney's Pocahontas. Here's what a typical Cherokee looked like: 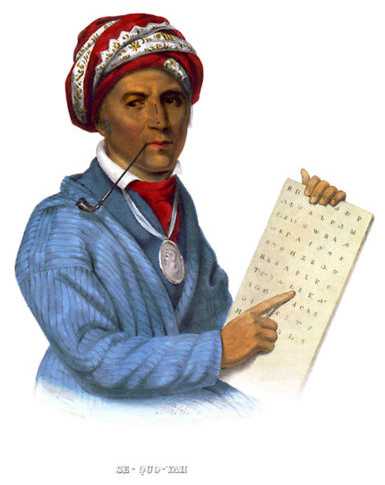 So Liv Tyler's stereotypical costume has reinforced your stereotypical notion of what Indians look like. And you were too ignorant to know the difference. To you, all Indians resemble the caricatures in old Westerns and sports logos.

You either don't know or don't care that Indians come from hundreds of disparate cultures. That they're as different from each other as the people of Ireland, Greece, Russia, Sweden, and Spain. To you, they're all the same.

To reiterate, you thought Liv Tyler = Cherokee = Indian princess = Pocahontas. You thought this because you've seen it in countless Halloween costumes. Thanks for demonstrating so clearly what's wrong with pretending to be an "Indian" on Halloween.

Round 2Glad to see you posted a real quote instead of your made-up quote this time, Anonymous. Congratulations on learning how to quote someone correctly.

Unfortunately, you still seem to have a reading problem. "It's not cool" isn't even close to "It's racist." So Brooke still hasn't said that every ethnic costume racist. And no amount of false and malicious (mis)quoting can put those words in her mouth.

In other words, yes, you're arguing against a straw man that doesn't exist in Brooke's posting. Maybe she believes that every ethnic costume is racist and maybe she doesn't. But until she actually writes that such costumes are more than uncool, quite wasting our time with phony arguments.

And once again, you've tried to distract us. You've invented your own argument so you could duck what's obviously Brooke's thesis. Here it is again:Note again the key word "stereotypical." Not all costumes, Anonymous--stereotypical costumes. As DMarks said and I reiterated, no one would object if Liv Tyler dressed like Wilma Mankiller or John Herrington. Because those Indians don't dress like stereotypes.

So again, why do you keep inventing arguments rather than addressing Brooke's arguments? What are you so afraid of? Who knows, but until you address her thesis, I'll continue to point out your obfuscation.

Your argument for Liv Tyler seems to be that maybe some Cherokee woman somewhere dressed like that, so who am I to judge? As arguments go, that's pathetic. You clearly don't know jack about Cherokees, so all you can do is insinuate that my ignorance is almost as bad as yours.

FYI, I've read about, seen, and met many Cherokees. Thousands of them, probably. None of them dressed like Tyler.

I gave you one of many examples of how the Cherokee dressed. Here are some more:

You were losing 1-0. Now you're losing 7-0. So now it's your turn. If you're not as ignorant as you seem, show us a picture of an actual Cherokee dressed like a Pocahontas princess. Good luck with your answer...you'll need it.

In other words, stop sharing your fantasies about what Cherokees were like and start providing concrete evidence. I did it, so you can do it too. Put up or shut up, bright boy.

I've debated Indian wannabes like Tyler hundreds of times on my website. I'm not going to repeat every argument here. I've answered every question I wanted to and every question put to me. It's not my job to explain everything you don't understand about Native stereotypes.

There was no fallacy in Brooke's original posting. The only fallacy is yours. You wrongly think people don't learn about Indians from the stereotypes in our culture: on sports logos, in movies and TV shows, and in Halloween costumes.

Unfortunately for you, many psychological studies and experts say you're wrong--that you don't know what the hell you're talking about. But since you're sure Brooke's position is fallacious, I'm sure you can correct her. So tell us: Where do most Americans get their erroneous opinions about Indians from?

You seem certain that Halloween costumes aren't the source, so list whatever you think are the sources. Be explicit and document these sources with bibliographic citations (book titles and page numbers, URLs, etc.). Again, put up or shut up.

The only question I see you asking is "Who decides?" Who decides what...whether a Halloween costume is acceptable? Everyone who's capable of making a moral judgment, that's who.

I don't recall Brooke asking for some authority to decide which costumes are wrong. All she did was advise people to stop wearing stereotypical costumes. So again, you've invented a straw-man argument--something you seem to be good at.

I don't advocate banning offensive costumes and I doubt Brooke does either. So the answer is: You decide what costume you want to wear, and people like us will decide whether it's racist. Even better, we'll explain why. You can use the information to stop being racist or ignore it and continue.

Is that clear enough for you? If you don't like being called a racist, stop wearing racist costumes. It's just that simple.

Oh, and for those who don't know the definition of "racist," I'll help you. It's something that discriminates on the basis of race. If you wore stereotypical costumes of every racial and ethnic group, including your own, you'd still be wrong, but you wouldn't necessarily be racist. But when you single out Indians for the stereotypical treatment, that's the epitome of racism.

For more on the subject, see The Harm of Native Stereotyping:  Facts and Evidence and Tricking or Treating Indians. And have a happy Halloween!

P.S. It's funny to see you use sic on Brooke's comments when your comments are riddled with mistakes. I suggest you learn how to capitalize so you don't look like some schoolkid texting his responses.

Below:  A typical Halloween costume that defenders of racism defend.

I still think this eBay listing says it all.

A Chief Joseph costume was indeed a weaker example to name along side Mankiller and Herrington, but it can be said that probably none of these chief costumes has anything to do with an actual Native leader, and have more to do with this Chief.

Hello from Russia!
Can I quote a post "No teme" in your blog with the link to you?

I didn't continue with your Chief Joseph example for the reason you surmised, DMarks. Someone could say, "Well, he looks vaguely like a stereotypical Plains chief. Does that mean the stereotype is okay?" I wanted a clear dividing line between stereotypical and not stereotypical.

I don't know what "No teme" means, Anonymous. But yes, you can quote and link to my blog.

I'm not surprised that my blog has received so many comments regarding its "over sensitive" criticism of Halloween Costumes. What is the gauge of sensitivity concerning Native American costumes? Who decides? The group or individuals the costumes represent or those who have no ties to that ethnic group? Seriously, it feels as if someone punched me in the stomach and told me to "get over it, it doesn't hurt"!

Fashion changes as culture touches each other, new materials get introduced, the weather changes.

The period in question is before European influence.

Rob you still haven't answered the question. What were the Native Americans wearing before the Europeans showed up?
Why can't we be educated about this? Why can't we wear that clothing if we want to?