Here's an example of a New Ager defending the appropriation of Native sweat lodges:

New Age vs. Native AmericansComment:  "Thanks for 'honoring' us with your mascots and Halloween costumes and phony New Age rituals," an Indian might say. "Now honor us by upholding our sovereignty and our treaty rights, you stupid twit."

The "honoring Indians" argument is as phony here as it is everywhere else people offer it. How is a cheap, money-grubbing imitation an honor? Why not ask Indians if they feel honored and listen to them when they say no?

A New Age ceremony is to a Native ceremony as a minstrel show is to a genuine African American performance. People could and probably did claim that minstrel shows were harmless entertainments meant to acknowledge and honor blacks. Do I really need to explain how flawed this argument is?

Here's an idea: Next time you want to sell a sweat lodge, label it clearly and accurately. For instance, "This sweat lodge is 100% non-Native. It has no connection to Native culture." Why wouldn't you do this if your intentions are honest?

So go ahead and do it. Let us know how much business you lose from telling the truth.

What about Rodgers' argument that New Age ceremonies don't take anything away from Native ceremonies? That the two can co-exist peacefully? This argument seems plausible...but it isn't. Some quotes from New Age Mystics, Healers, and Ceremonies suggest the real harm of New Ageism:As I've said many times, stereotypes harm Indians. The primary harm is ceding the power to define who or what is Indian.

For instance, politicians and the public will oppose an Indian casino because "those people" don't look or act like Indians. In other words, they don't resemble bare-chested athletes or touchy-feely "wise men." People who wear regular clothes and talk about economic development or healthcare can't be real Indians because they don't fit the mold. The mold defined by New Agers and others who stereotype Indians.

New Agers are much like wannabes with Cherokee princesses in their background. Like the Ward Churchills and non-Native Twilight actors of the world. These people take jobs and other opportunities from real Indians. They define who Indians are to the generic public. When they do something wrong or stupid, they tarnish Indians in people's minds.

When New Agers define themselves and their followers as pseudo-Indians, being Indian starts to lose its meaning. If everyone can be Indian, no one is distinctly and uniquely Indian. "Indian" becomes a lifestyle choice rather than a cultural category with its own rights and privileges.

Below:  Some New Age bastardization of a Hopi myth. 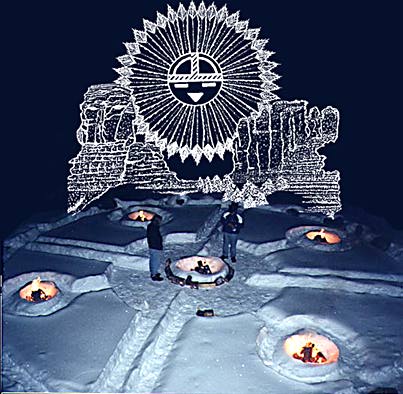 I saw one of those "ancient mysteries" shows on the History channel yesterday. They were trying to make the case that the Knights Templar travelled to southern Illinois pre-Columbus and left all kinds of carvings and artifacts.

Overall, it was respectful to Natives, and lacked the "Indians were too stupid to have even built mounds, so white Eurasians did it" meme found in Mormonism/etc.

However, they showed some carvings of the basic Medicine Wheel crossed circle, and used it as evidence of Templares (Europeans also have a symbol like this: "Also known as the Sunwheel, solar cross, or Odin's cross, because Odin's symbol in Norse mythology was a cross in a circle. Used throughout Native American culture to represent the great Medicine Wheel of life.
"). Here, the makers of the show forget that this is an old Native North American "logo" on its own.