On the sidelines, the sad symbol of a sorry tradition

By Courtland MilloyAnd:Comment:  For all we know, Zema Williams (aka Chief Zee) could be a black Indian, so we can't be sure he's the wrong person to play an Indian. But unless he's an elder of a local tribe, the choice seems like a bad one.

He's sporting a Plains-style headdress, which only revered chiefs are supposed to wear. His appearance doesn't match the Washington DC location or the Redskins logo. It's as if the Redskins are saying all Indians fit the Plains Indian stereotype. As if they're all the same.

So the Redskins are "honoring" Indians with a stereotypical mascot who (probably) isn't an Indian and is too old to walk. As Milloy notes, he's a relic of the past--the equivalent of a cigar-store Indian. He's an animated trophy--the embodiment of the defeated chiefs after the Indian Wars. He serves the same function as a Geronimo or a bear in a parade, reminding us how great we were to tame the wild Indians.

The Redskins could honor Indians by actually honoring Indians. For instance, by introducing an Indian college student at each game and giving him or her a scholarship. But Chief Zee is an honor only in the feeble minds of Redskins supporters. As an Indian symbol, he's a joke. 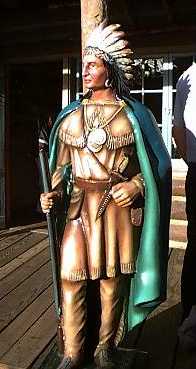 they should change the Name first of all I mean its racist in and of itself. the mascot just adds insult to injury.