Here's a controversy that brewed on Facebook the last few days:

By Tyler HaydenAfter several days of real and virtual protests, the store owner relented. The owner "didn’t realize the shirt was offensive and removed it from his stock just to avoid any future problems." 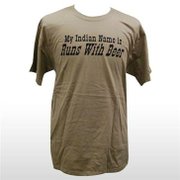 Moon River's owner apologizes and agrees not to sell the shirts anymore: "We are not fluent with English, and we clearly did not understand what the t-shirt was suggesting."