Are t-shirt protests worth it?

The aftermath of AIM Santa Barbara's fight against an "Indian name" t-shirt:

Not everyone thought protesting a stereotypical t-shirt was a good use of time. Some Facebook comments on the protests:But AIM Santa Barbara posted this defense of their actions:

I can see both sides on this issue. On the one hand, it was a single shirt in a single shop, probably hanging out of sight. In previous t-shirt battles, some vendors were selling a whole line of "Indian name" t-shirts. Others were selling them online or at universities or both, where a lot of potential buyers could find them.

On the other hand, I frequently discuss the harm of Native stereotyping, the effects of microaggressions on minorities, and the "broken windows" theory of racism--how small problems can escalate into large ones. How do you stop something like the treatment of Frank Paul, the drunk Indian who was left in the snow to die? By teaching the police and others to treat drunk Indians like people, not stereotypes.

Also note that AIM Santa Barbara generated enough publicity to get an article in the newspaper. Media awareness is always good. It tells the people who think Indians are extinct that they're not. That they're still here and still fighting for their rights.

If it were me, I might've talked to or e-mailed the store owner once...posted something about it online...and then moved on. If I were going to tackle "Indian name" t-shirts, I'd find out who's manufacturing and distributing them. I'd try to cut them off at the source.

I'd organize AIM chapters and anyone else who wanted to protest into a national force. I'd launch a "letter-writing" campaign with phone calls, e-mails, social media, and, yes, letters. I'd think about staging a live event, perhaps a shirt burning, so the media would cover it. I'd get a celebrity such as Russell Means or a Twilight werewolf to be the face of the protest.

So I wouldn't tackle one "Indian name" t-shirt at a time. That's inefficient; it's not the best use of one's time or energy. But I would tackle the t-shirts and mascots and other "little everyday issues." I think the naysayers are naive about the connection between how we perceive Indians and how we treat them. 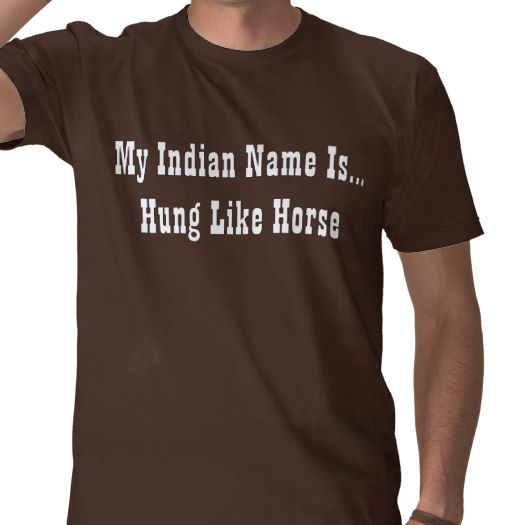 More seriously, though, are we ignoring that Indians are still second-class citizens? A t-shirt or a mascot is nothing compared to, I don't know, A LEGAL SYSTEM WHICH PRETTY MUCH ALLOWS ANY WHITE GUY TO COMMIT UNSPEAKABLE ACTS AGAINST YOU.