Facebook friend John wrote a typical defense of conservative hatemongering:Right, and no one ever acted because of something he read in the Bible or the Koran, either. Antisocial behavior materializes out of thin air and is totally unrelated to external sources.

Fact is that antisocial behavior always happens on the margins, so how you or I would respond isn't relevant. What's relevant is how external sources affect people who are intellectually or emotionally challenged.

The Giffords shooting provides a good opportunity to apply the thesis of "Such-and-Such Is Fiction" to a real-world example. Therefore, I continued with these sarcastic comments:

Neither the Bible nor the Koran ever influenced anyone. Same with speeches by Lincoln, Churchill, FDR, JFK, MLK, Reagan, et al. Same with right-wing hate speech. People's beliefs and actions materialize out of thin air for no discernible reason and are totally unconnected to external sources.

The 9/11 terrorists weren't influenced by hate speech similar to, but worse than, the hate speech used by today's conservatives. No, they killed 3,000 Americans for reasons unrelated to what they were programmed to believe by relentless hate-filled lies and propaganda.

John responded:There's a lot less of it than rightist hate speech. And it's more subtle, which means it's more like passionate political advocacy than hate speech.

Can you imagine Reagan saying Democrats such as Tip O'Neil threatened the American way of life or were a danger to the country? I can't.

P.S. My list included FDR, JFK, and MLK, so clearly I think liberal speech can affect people as much as conservative speech.

Someone named Windy chimed in:To preempt DMarks before he inevitably recycles his isolated and irrelevant "Bush = Hitler" counterexample, I added:

George W. Bush launched an illegal war based on false intelligence that has killed thousands of innocent people. When any Democratic politician does that, you have my permission to say nasty things about him or her. Until then, no. 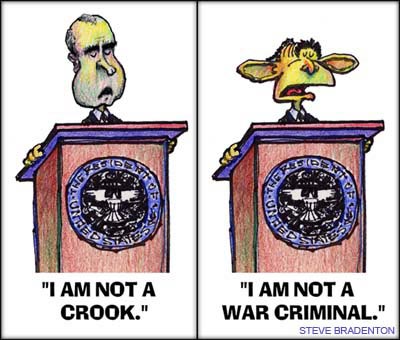