By Julia HickeyComment:  With all the tribes in central California, the statue shows a generic Indian in a loincloth praying to the Great Spirit? This is worse than the Black Hawk statue and as bad as the Massasoit and "American" statues I've talked about. It's stereotypical and wrong for the reasons I gave in Rob vs. Curator on Massasoit Statue and Massasoit the Noble Savage.

Below:  "Cyclists admire the bronze sculpture of an American Indian that now graces a corner of Prado Road and South Higuera Street." (David Middlecamp) 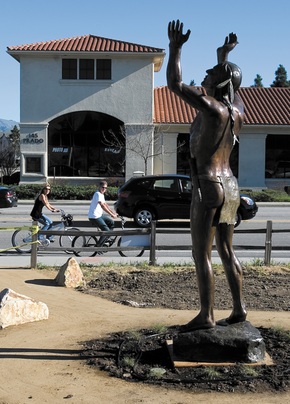 These monuments have an inherent "noble savage" quality to them, sadly. I don't think it's leaving Western culture any time soon; it pre-dates Western contact with Indians by several thousand years. (Technically, Enkidu fits the prototypical noble savage.)

I will say that their hearts are in the right place.