By Michael BrennerComment:  Brennan wrote this primarily about Muslims, but it applies 100% to Indians. Indeed, we have 500 years of thinking about and treating Indians this way, as opposed to 10 (or 50 or 100, depending on when you start) for Muslims. As I've noted many times, we've defined ourselves as white Anglo-Saxon Protestants who "tamed the wilderness" for God. Taming the wilderness means taming the Indians; they're synonymous.

For more on the subject, see "6 Ridiculous Lies" About Indians and Chomsky on Genocide Denial.

Below:  "How dare you threaten us with your heathen ways?!" 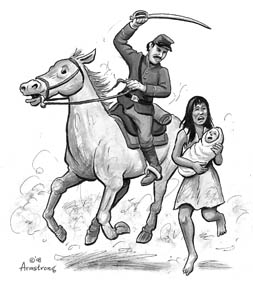 Americans generally have a very egocentric philosophy. That's why you hear about how someone won because he "wanted it more". There's a cult of the self in America. That's why you have people who believe that a narcissist suffers from "low self-esteem".