Epithet that divides Mexicans is banned by Oxnard school district

'Oaxaquita' (little Oaxacan) is used by other Mexicans to demean their indigenous compatriots—who are estimated to make up 30% of California's farmworkers.

By Paloma EsquivelComment:  I wonder how much difference there is in the "blood" of indigenous and non-indigenous Mexicans. Is there any difference?

Ironic to see Mexicans discriminate against each other. To many Americans, they're all one big brown horde.

For more on the subject, see More Latinos Identify as Native and "Most Mexicans Are Indians."

Below:  "Abelardo Popec, left, and Romaldo Lopez listen to speakers as indigenous Mexican students and leaders of Ventura County public schools launched the "No Me Llames Oaxaquita" (Don't call me little Oaxacan) campaign at the Center for Employment Training in Oxnard." (Anne Cusack/Los Angeles Times) 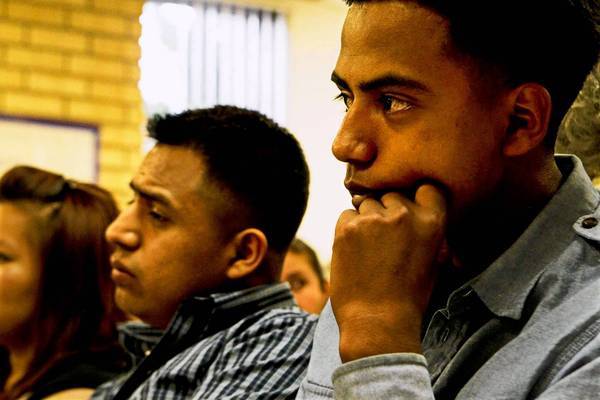 There's also "indio feo" (ugly Indian) and a few others. Yeah, Indians have it tough in Oaxaca. It's not even just words, of course. Words do nothing by themselves. It's actions.