By Matt SpringerComment:  Note the stereotypical Plains imagery below. I believe a Native artist created this image, but still.

The concept of a Native "shape shifter" is vaguely stereotypical too. It implies Indians are especially tricky and difficult to discern, not to mention mystical and otherworldly.

So the album encompasses two prime stereotypes: the Plains warrior and the supernatural "shaman." I'd be more impressed if Santana "honored" Indians some other way. Perhaps by recognizing them as a modern and diverse range of people. 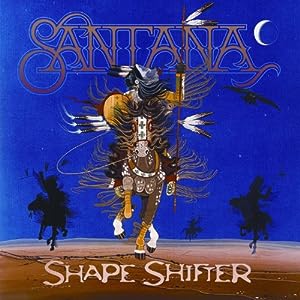 Email ThisBlogThis!Share to TwitterShare to FacebookShare to Pinterest
Labels: music, Stereotype of the Month, stereotypes

He previously had one called Shaman. Little does he (or most people, for that matter) know that "shaman" is a snarl word used by anthropologists with an "all primitives are the same" implication.

Anon: "Shaman" also has such a dubious usage with an Alpha Flight Native superhero.

I never heard my friend the Odawa medicine woman use it, and in fact I only ever find the word used in "distant, ignorant, and generalizing" contexts such as the anthropologists you mention, and also new-agers.