Adrienne Keene reports on a museum exhibit in her Native Appropriations blog:

Thawing the Frozen Indian: Brown University's new anthro exhibitAnd:Comment:  I've seen exhibits about Native stereotypes and cultural appropriations before. Usually they start with paintings, dime novels, and Wild West shows from the 19th century. They end with mascots, lunch boxes, and Land O' Lakes butter from a few decades ago.

Perhaps because it's student-curated, this exhibit seems more up-to-date. The students are familiar with the Native Appropriations blog; they quoted Keene and included the Urban Outfitters and Mariah Watchman controversies.

They also used comments from Facebook, which is an approach I haven't seen used before. As those of us who read and write blogs know, some of the best insights come from online exchanges.

Anyway, it sounds like a good exhibit, and perhaps a sign of things to come. Namely, more exhibits from non-professionals that engage people with today's issues in today's voices. 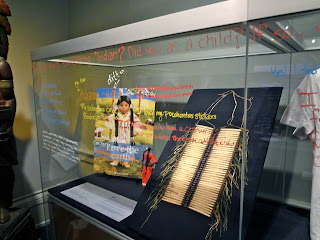