Seattle's Burke Museum has created a website to present, well, "The Truth vs. Twilight." The stated purpose:All the site's critiques are worth reading, but I particularly liked these sections:

Racial and Class Stereotypes in TwilightSeems to me some people didn't get it when I made similar points in my critiques. Which still mystifies me. The Indian werewolves are poor, working-class stiffs. The white vampires are rich elitists with fancy houses and cars. But you don't see a racial message in the huge disparity between whites and Indians?! Open your eyes, people!

Cultural Theft in TwilightA blog summarizes the rest of the site:

Tribe takes on ‘Twilight’ silliness: We ‘do not turn into wolves’For more on the subject, see Quileute Exhibit Says "We're Not Werewolves" and Fans Still Ignorant About Quileutes. 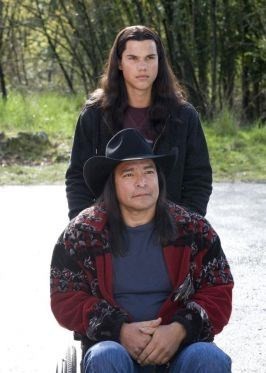 Kahelela sounds Hawaiian, not Indian at all.

What I really don't get is how we're expected to believe that Indians, like Twi-pups, are the only ones who have so many dysfunctional sexual relationships. (Seriously, cheating? Deadbeat dads? Doesn't every culture have those? Even in the ones that punish it so severely that one would have to be insane to do such things, it seems men are immune to punishment.) White Twi-vamps apparently have never had a dysfunctional sexual relationship.

(Could be worse, I suppose. I'm willing to bet an Indian vampire in fiction would be a cannibal necrophile, among other things we associate with vampires in horror stories.)