Someone told me Wednesday about the following event scheduled for Saturday.

Seems a company called Bedlam organizes provocatively themed parties for young hipsters in Atlanta, Georgia. Their latest brainstorm was a "PocaHotAss" party in honor of Thanksgiving. You know, because of the Pilgrims and Indians.

The idea, of course, was to dress as an Indian and let your wild, savage side go free. Once Bedlam posted the event on Facebook, however, the inevitable firestorm of protest arose. 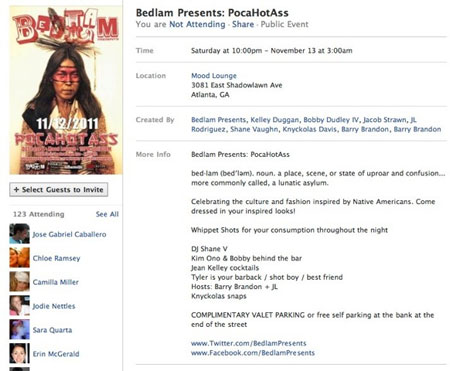 Bedlam tries to defend itself

The Bedlam people and their supporters offered the usual excuses and rationalizations:


So the hell what? Most racists don't intend to offend anyone--at least in their own little minds. What matters is the outcome, no the intent.

For more on the subject, see The Magical Power of Intent.


No, there isn't. Racist acts can be large or small. They don't have to be anything as monumental as burning a cross or lynching an innocent person. Clutching your bag or crossing the street when you see a black man is an example of racism even if you do it unconsciously.

In other words, two wrongs don't make a right. If that's your best argument, you don't have much of a leg to stand on.


Again, so what? Some plantation owners treated their slaves with the utmost Christian compassion. You're an idiot if you think "racist" means "slavering monster" or "unbearable ogre." It means anyone who discriminates by race--regardless of how kind they are to children and dogs.

Besides, as someone pointed out, Bedlam has hosted parties making fun of gays, women ("hos"), the disabled (a really special "Special Olympics"), and the mentally ill (go crazy at the "insane asylum"). So they're hardly scions of sensitivity.

Rather, it's clear they push the boundaries of acceptability to be edgy and cool. This time they got their butts kicked because of it.


As I pointed out, Pocahontas has nothing to do with Thanksgiving. Alas, the organizer's "knowledge" fails on the most basic level. Duhhh.

It couldn't be more clear that Bedlam thinks all Indians are the same. That they're savages who whooped and danced their way through American history from Columbus to Wounded Knee.


Critics responded with comments like: Come up with your own damn theme. It's not our responsibility to help you out of your self-inflicted mess. If you so uncreative that you can't think of anything, maybe you're in the wrong business.

My suggestion was "Harvest a Hot Ass," in keeping with the thinly veiled misogyny of "PocaHotAss." I also said Bedlam considered "Rape a Native Ass"--basically the same idea--but decided it would be offensive. Because that's how sensitive they are (not).

Someone also requested future party themes. I suggested "Masters and Slaves" for African American History Month in February. Because that's roughly the black equivalent of "PocaHotAss."

Perhaps the funniest part of this promotion was Bedlam's alleged goal: "celebrating the culture and fashion inspired by Native Americans."

The "culture" (singular)? This event does nothing to celebrate the thousands of Native cultures across the Americas.

"Fashion"? Even if party-goers show up in their "Navajo" apparel from Urban Outfitters or Forever 21, the event does nothing to teach them about the Wampanoag at the first Thanksgiving or the Powhatan tribes of Pocahontas.

All it does is give them license to dress up in "feathers and leathers" and pretend to be wild savages. You know, like every other unoriginal, clichéd "tribal" event across America. That's the opposite of celebrating Native cultures, you morons.

For more on Pocahontas, see Pocahontas Statue in Previews and Sophie Turner's "Poca-Hotness." For more examples of non-Indians in redface, see "Trail of Tears" Halloween Costume and Fake Indians in West Hollywood.
Posted by Rob at 5:25 PM

You're really being a little too sensitive here...
The issue of being "p.c." is such a disgusting one, and is just a form of censorship, and censoring other peoples thoughts, views, or right's to assemble are no better than the people holding the disgusting event.

People like you and Tipper Gore should have an in-depth conversation, I'm sure you would agree on a lot of things. Maybe you can stop a Marilyn Manson concert or 2.

Anon: It is not a form of censorship unless the government starts punishing people for it.

What Rob and others are doing here is free speech, actually.

You realize, Anon, that being offended is not the same as censorship.

And so it continues.

Censorship is when you're not allowed to say it. But in Troll World, the rest of us having an issue with it is also censorship. The fact that I don't dress up as Bugs Bunny when having sex (to use one trolls like yourself are more than familiar with) is 'fursecution' and makes me as bad as the Nazis.

Thankfully, I don't live in Troll World. The troglodytes can complain about 'censorship' if they want, but they've clearly never taken on an artistic measure in their life. Censorship is all around you in art.

Also, Marilyn Manson? Has he even had a concert in a decade? Probably not since the bit of non-consensual frottage on a roadie's face as part of the show.

Anon: Marilyn Manson last toured 2 years ago, not a decade ago.

Perhaps you have him confused with Marilyn Monroe, who hasn't toured in decades due to her death, or Charles Manson, who can't do much more than the Jailhouse Rock.

The reason natives are used as themes is because non-native Americans have no legitimate culture themselves. They are a bastard culture that needs to invent, re-invent or salvage for self-identity.

In a way, we need these little occasions to remind us just how lost and scattered the American people still are after landing on this continent over 500 years ago. Things still haven't changed and Americans are still a lost people.

Anon said: "The reason natives are used as themes is because non-native Americans have no legitimate culture themselves."

That is rather racist and arrogant on your part. And completely ignorant. Just because you dislike a culture does not mean it does not exist.

Only a racist would say that their ethnic group has a culture and others do not. I've seen similar logic coming from Nazis.

The racist has no idea what he is talking about.

What is your American culture Dmarks? Coca-cola and McDonalds? Compared to indigenous peoples that have had and still have, ceremonies and dances, I'd say non-natives are a bastard culture exported from Europe, Africa and Asia. When Americans start relating to natives as ancient peoples as they have disowned from Europe, Africa and Asia, then you might have a point!
You do not have an edge on the Jews and Hitler Dmarks! You remind me of Glenn Beck. Everytime he is cornered, he breaks out the finger pointing of ranting about Hitler and Jews, or racism.
Tell us how much you know about the tribes where you live or the history before Americana Dmarks and quit screaming blasphemy everytime you get put on the spot!

Anon asked: "What is your American culture Dmarks? Coca-cola and McDonalds?"

Only someone ignorant, arrogant, and racist would ask this sort of questions. If I were the same sort of bigot, I'd ask "What is Native culture. Frybread?". But I am not.

"Compared to indigenous peoples that have had and still have, ceremonies and dances"

To say something is older and therefore superior is boneheaded arrogance. And flies in the face of Rob's laudable multicultural ideals.

"I'd say non-natives are a bastard culture exported from Europe, Africa and Asia."

Bigots going the other way could point out the pow-wow tradition, which is really rather new and bastardized. But I won't. I am not such a bigot. I don't see a pow-wow dance as any better or worse than an Appalachian step dance.

"You do not have an edge on the Jews and Hitler Dmarks! You remind me of Glenn Beck. Everytime he is cornered, he breaks out the finger pointing of ranting about Hitler and Jews, or racism."

No, I only make such comparisons when they are accurate.

Totally irrelevant. Nothing would convince me to adopt a supremacist attitude.

"and quit screaming blasphemy everytime you get put on the spot!"

I am not screaming blasphemy. I am only accurately pointing out your small-minded supremacist attitude.

I certainly was not on the spot. You are digging yourself a deeper hole in the one you are in.

You are a bad citizen of the world. You are justifiably proud of your culture, but your attitude that it is superior to all others is rather destructive. And I am not Glenn Beck to point out that such attitudes lead to major atrocities.

(I wonder if the above Anonymous is the same as the supposed native, Burt or whomever it was, who used the experience of having talked to two bigoted Jews in College in order to bring up a rash of antisemitic tropes including his claim that the Jews deserved the Holocaust).

You might notice that minority groups who stick together and still keep their customs/language/values after migrating to America tend not to feel the need to appropriate other groups of people.

This is my main issue with media pushing a homogeneous "American culture"/melting pot philosophy.
All it does is create people estranged from themselves and their own backgrounds ("but we have no culture/our culture is boring") that go on to compensate by eating others.