The day after people found out about the "PocaHotAss" party scheduled for Saturday, the event was history. Here's how it went down:

By Dyana BagbyUnfortunately for Bedlam, the vodka company it claimed as a sponsor said it didn't know or approve of the "PocaHotAss" theme. It pulled its support. That and the controversy forced Bedlam to cancel the event.

The article also captured some of the arguments between Bedlam's supporters and critics:Wow, what a stupid argument. For starters, you think dressing up as a blackfaced minstrel performer, a Mexican bandito, or a big-nosed greedy Jew wouldn't be offensive and racist? Those costumes are the epitome of offensive racism. If you're saying they're not racist, you're saying there's no such thing as racism. Which of course isn't true.

Below:  White Australians pretending to be the Jacksons. Not offensive?! 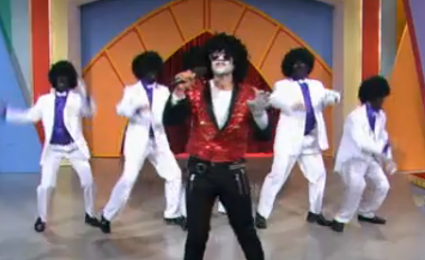 Also, the criticism isn't just about the costume, dummy. People roundly criticized your "PocaHotAss" theme for turning a young Native girl into a sexual object. Especially when sexual violence against Native women is rampant.

And they criticized you for confusing the Wampanoag Indians who met the Pilgrims with the Powhatan Indians who raised Pocahontas. They're two completely different cultures hundreds of miles apart. It would be like having a British "lords and ladies" party with people dressed as Italian gondoliers or organ-grinders. Same continent and race but vastly different cultures...get it?

This "all Indians are the same" mentality is exactly why these costume parties are offensive. And why they're racist. If you recognize dozens of Caucasian cultures but think there's only one Native culture, your thoughts are racist. The issue isn't how unkind and uncaring you are, but how ignorant you are. You implicitly think white Euro-Americans are more diverse, sophisticated, and "civilized."

So saying this protest was only about a "costume" shows how obtuse the organizers were. Anybody this out of touch with reality has no business coming anywhere near the minefields of race and culture.

Playing Indians = celebrating fashion?Again, so very stupid. The invitation asked people to dress as Indians. To 99% of the population, that would mean stereotypical headdresses and buckskin outfits. What does this have to do with "fashion inspired by Indians," which would mean shirts, dresses, and jackets with Native patterns? You know, like the "Navajo" products from Urban Outfitters and Forever 21 we've discussed recently.

The two have nothing in common. Again, we're talking about plain brown buckskins without Native patterns vs. colorful modern clothes with Native patterns. With Bedlam's "Pilgrims and Indians" and "PocaHotAss" themes, the vast majority of attendees would dress in stereotypical "feathers and leathers."

So the party fails on multiple levels. The organizers should thank us for rescuing them from making a horrendous mistake. "Poke a Hot (Native) Ass" for Thanksgiving...incredible.

For more on Pocahontas, see Pocahontas Statue in Previews and Sophie Turner's "Poca-Hotness." For more examples of non-Indians in redface, see "Trail of Tears" Halloween Costume and Fake Indians in West Hollywood. 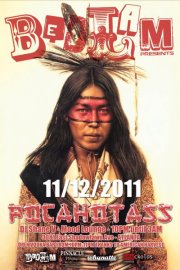