The Thanksgiving episode of New Girl (airdate: 11/15/11) begins with the inevitable school pageant. A fake Indian in buckskins, a feathered headband, and warpaint (!) joins fake Pilgrims in singing:Comment:  Warpaint...really? To celebrate what's supposed to be a holiday of peace and friendship?

Way to make the Indian look more savage and warlike. Even though he's singing a pro-Indian song, the message is that he's strange and scary.

And of course Thanksgiving pageants obscure more than they reveal about American history. For instance, how the Europeans already were enslaving Indians and killing them with disease nearby. The myth of the big happy feast is just that...a myth.

For more on the subject, see Bedlam's "PocaHotAss" Party and Sexy "Indian" in New Girl.

Below:  Justin Long and Zooey Deschanel in tasteful gourd and turkey outfits after the tasteless student in redface moves off-screen. 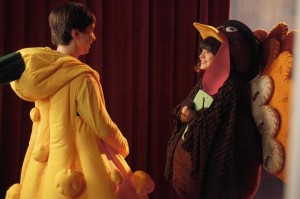