By Brian R. BallouComment:  We've seen Indians and Occupiers find common cause in Occupy Denver Joins Columbus Protest. And Indians criticize Occupiers in Occupiers Aren't Decolonizers. I hope Indians continue to join the protests while critiquing them as needed.

Below:  "Jeremy Harper (center) was one of a group of about 30 protesters from the Occupy Boston encampment who marched with the Day of Mourning gathering." (Yoon S. Byun/Globe Staff) 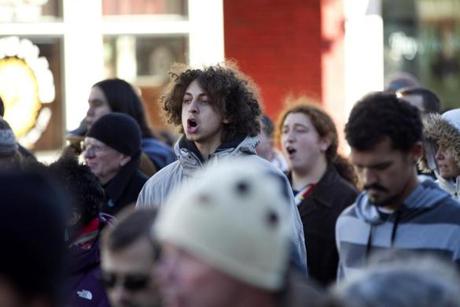