The former Mouseketeer had a penchant for storytelling and the ability to mimic animal sounds. Her voice was featured in 'The Sword in the Stone' and 'Mary Poppins.'

By Valerie J. NelsonComment:  So Tyler traced her ancestry to the Snoqualmie tribe, but she probably wasn't a member of it. Disney traced her storytelling and mimickry talents to the tribe, but Tyler didn't necessarily claim this sources.

The articles also say Tyler's mother was the real source of these abilities. But it's not clear if the mother was in the same line of descent. Tyler could've been Snoqualmie on her father's side.

Also curious is how the Snoqualmie chief went from sounding cold and callous in the original to warm and supportive in the correction. It's a small but telling example of how easy it is to misrepresent another culture. How many millions of times have we labeled Indians "cruel" because they did something we didn't understand? 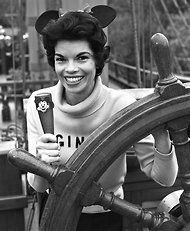 Email ThisBlogThis!Share to TwitterShare to FacebookShare to Pinterest
Labels: Disney